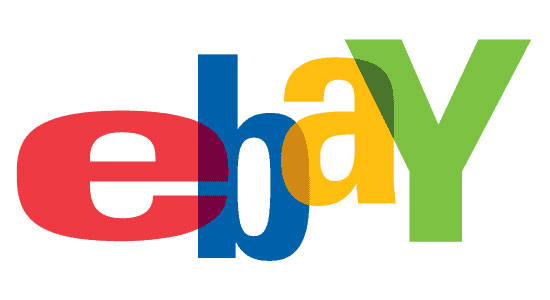 Wawerna: I live for eBay. Pretty much anything of import that I own was purchased on eBay. eBay is my addiction. It is the homepage on my computer. It functions both as my lifeblood and my kryptonite. It has brought me great happiness and also great sorrow.

I buy everything on eBay: vintage clothes and shoes, discontinued beauty products, sunglasses, my BlackBerry, handbags, popular toy action figures from the ’80s, Bakelite bracelets from the ’70s, books, a set of plastic drink coasters made to look like oranges, back issues of Dog Fancy, loudly patterned teal oilcloths—the list goes on and on. Each item has a story, and whether it was purchased through a feverish bidding war or an effectual “Buy It Now” transaction, my pride swells nonetheless. For it is all about the thrill of the hunt, a thrill that often becomes exacerbated with alcohol. For instance, I once spent $55 on salt and pepper shakers in the shape of squirrels.

But some of my most beloved—and most disastrous—purchases have been music-related. I have experienced great highs and even lower lows in this particular genre, and I’ve anthologized some of them here for your pleasure.

My First eBay Purchase. My First eBay Failure. My First Electric Guitar.
When I moved to New York from Austin after college, I took up with a varied array of miscreants living in Brooklyn. Among them was Timothy Bracy of the Mendoza Line. Tim was instrumental in encouraging me to write and play music. At that time, I was young and scared and intimidated by my friends, many of whom were in successful touring bands. Also, I was a terrible guitar player. I had played the piano my whole life, but I had never really taken the time to familiarize myself with guitar, and all I had was an old plastic-backed Ovation that my brother had given me a few months prior. I expressed my doubts to Tim, but he called bullshit and proceeded to teach me the first four chords I would ever learn on the guitar: D, A, Bm and G. The song was “Fuck And Run” by Liz Phair.

As I taught myself more songs, it became clear to me that the Ovation (though beloved) was no longer passable and that it was time to procure an electric guitar. But being a novice player, the idea of walking into a guitar shop was mortifying, so naturally I turned to the Internet. Everyone—and I mean everyone—I talked to said, “Please don’t buy a guitar on eBay. You’re going to get screwed.” I didn’t listen. I didn’t care. And I began scouring the site. Finally a Fender Telecaster caught my eye. The seller had photographed the guitar sitting on a stand outside, from several different angles—in the shade (this detail becomes important later). It was a 1984 USA Telecaster that appeared to have a dark matte charcoal-grey body. I’d never really seen another like it. It looked pretty bad-ass, and I decided I had to have it immediately. I sent the seller $800 via PayPal, and that was that. I was so excited. I tracked the shipment obsessively, and about five days later, it arrived. I tore through the packaging, flipped open the case and there before me lay … a shiny silver guitar. Not matte—glossy. Not grey—silver. Also I’m fairly certain the finish had sparkles. I wanted to die. I hated it. I hated playing it. It was my nemesis. But I was too prideful to tell anyone this, of course, so for two years I pretended to love it, and I would show it off to guests until one day I marched into 30th Street Guitars and sold it off.

There is one and only one picture that exists of this guitar. It was taken at a New Year’s Eve party I threw at my apartment in Brooklyn in an indeterminate year a long, long time ago. Unfortunately due to lighting, the true glittery nature of the instrument is not accurately represented in this shot, but I include it here because the photo also features Matthew Caws of Nada Surf playing it—and Matthew is one of my guest bloggers this week. It felt pertinent. 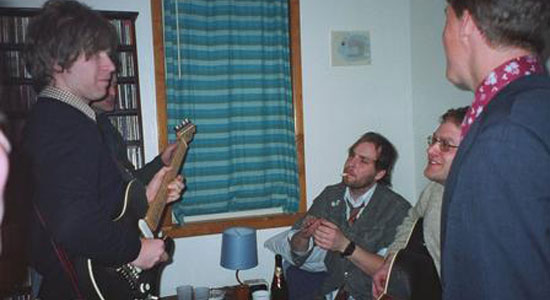 You’ll notice that the Ovation also makes a cameo here—in the capable hands of Peter Hoffman of the Mendoza Line—as does old friend and current Bird Of Youth bassist Johnny North, who no longer smokes. I am fairly sure we were attempting to sing “Grievous Angel,” and I am fairly sure it did not sound good.

The Replacements Key Chain
It has already been established that I love the Replacements. And early on in my eBay tenure, I learned that if you typed a band name—any band name—into an eBay search under the category of “music memorabilia,” some really random and cool shit would come up. I did this with the Replacements quite frequently. And one day, this key chain appeared: 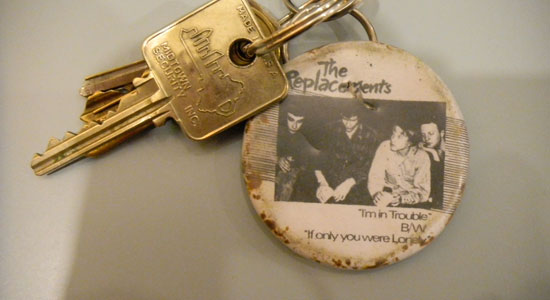 I own an original pressing of that 7-inch, so I took that as a sign and bought the key chain for $3.99. Seven years and three apartments later, it still holds my keys. And in case you’re wondering, it’s also a bottle opener: 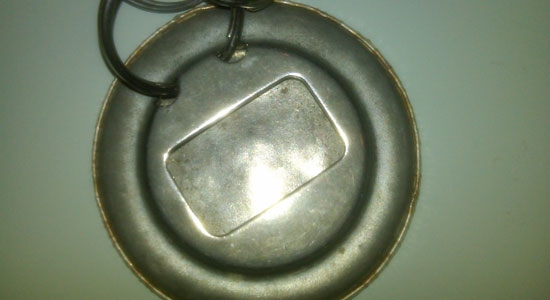 T-Shirts
And then … then … I started getting into vintage band T-shirts. This was a seemingly endless rabbit hole I’ve only recently crawled out of. Some of my favorites: 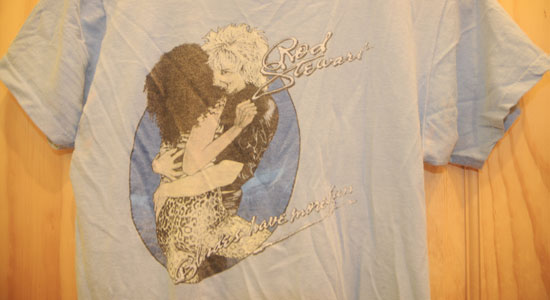 That says “Blondes have more fun,” in case you were wondering. 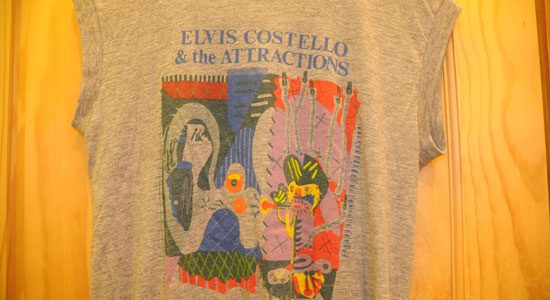 This is entirely too big for me. It’s also really thick and heavy like a one of those awful Beefy T’s. But Imperial Bedroom is one of my favorite Costello records, so I was more forgiving. 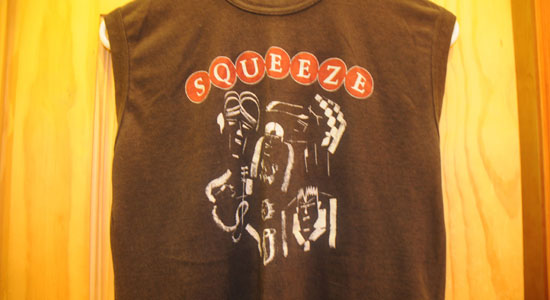 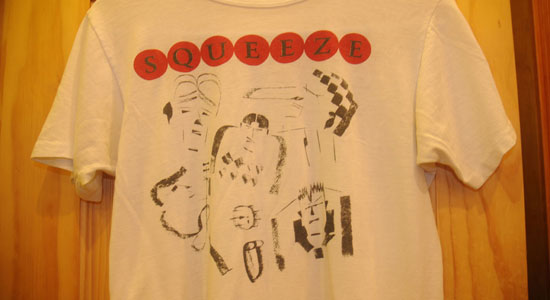 LPs
Buying LPs on eBay is not all that novel or interesting in and of itself. A lot of people do it, and I’ve done it a million times. I include this particular purchase, though, because of the special added treat that came with it. A few years back I found a guy who was selling a bunch of Replacements albums (all except Tim, boo). This seemed like a no-brainer. I bought them. They arrived. Here they are: 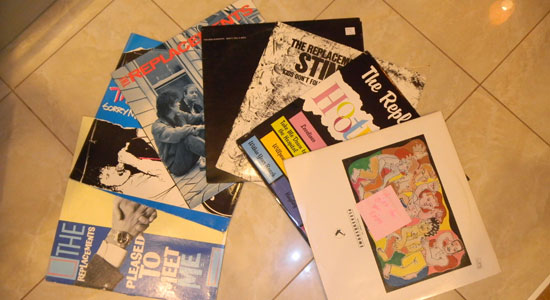 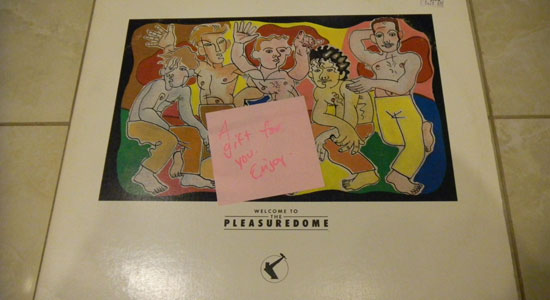 That’s right. Dude included a complimentary copy of Frankie Goes To Hollywood’s Welcome To The Pleasuredome.

Old Newspaper Ads
If you’re ever looking for a super-cheap way to decorate your house, search eBay for old newspaper or magazine advertisements promoting albums by your favorite bands. There are so many of these out there, and they are ridiculously cheap.

I got these for $3.99 apiece and framed them myself:
• Ad for Fleetwood Mac’s Tusk. Gets bonus points for having a dog in it, as well as my friend Julie’s reflection.
• Dr. Hook ad from NME. Really worth zooming in and reading.
• Ad for Elvis Costello’s “Accidents Will Happen” single. If you could read it, you would note the missing letters. 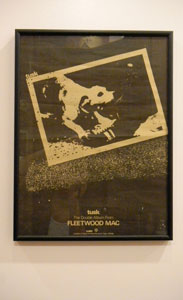 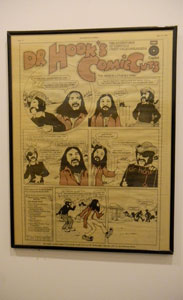 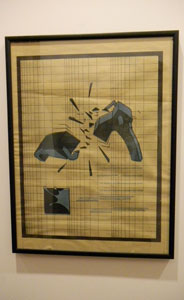 The Gibson Firebrand
Since I began this post by reflecting on the shimmering, silver blight that was the Fender—I thought it only appropriate that I end on a more positive guitar-related note. In the years since The Telecaster Incident, I’ve become a much more skilled and discerning eBay user. I am a good judge of whether a seller is trustworthy, I research pricing to make sure I’m not getting ripped off, I read the item description meticulously, and I discount any photo taken in poor light.

So about a year ago, I was trolling the site and browsing guitars—mostly out of boredom and not because I was in the market to buy. I was looking at Les Pauls specifically, and I came across a Gibson Firebrand (1981). I was immediately enamored with the wooden finish and also the general weirdness of the guitar. I’d never heard of a Firebrand, and in all my research, it was almost always referred to as “the poor man’s Les Paul.” Naturally, I had to have it.

I do not regret this purchase. The guitar sounds great and it is indestructible. I’ve dropped it on concrete (twice), and there’s hardly a knick. It’s a true workhorse and a basher and I love it dearly. Unfortunately I don’t have a photo of the actual guitar because it is on tour in Europe right now without me. But even better than the guitar itself is the original ad for the guitar that I dug up on the Internet. Check it out after the jump. I have the model on the left. It sizzles in my hands, because I am one of the world’s greatest rock artists. 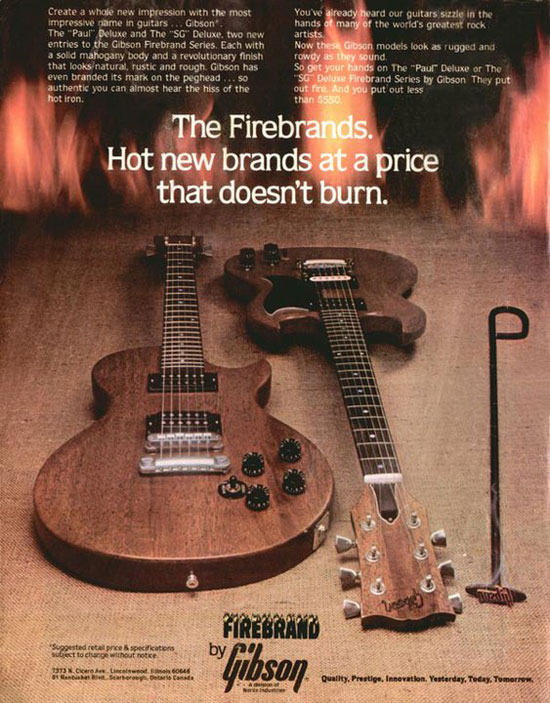