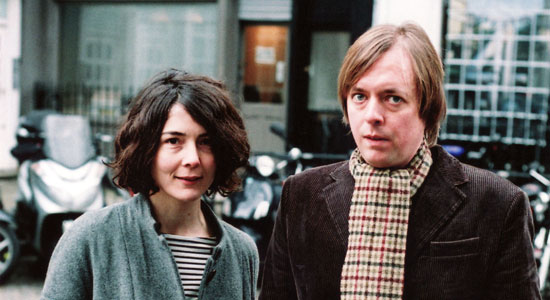 Amor de Días—the duo of Alasdair Maclean (Clientele) and Lupe Núñez-Fernández (Pipas)—just released debut album Street Of The Love Of Days via Merge. (Those of you who speak Spanish know that the band’s moniker translates to “love of days,” hence the album title.) Maclean and Núñez-Fernández worked on the 15-track LP for more than three years, and it features guest spots by the likes of Louis Philippe, Damon & Naomi, Gary Olson (Ladybug Transistor) and Danny Manners. Maclean and Núñez-Fernández will also be guest editing magnetmagazine.com all week. We recently caught up with the duo via email.

MAGNET: How did the two of you meet?
Maclean: In a pub called Ye Olde Cheshire Cheese in London. I’d been at a party a few months previously and admired some of her paintings, which were hanging on the wall, and the owner introduced us.

When did the inspiration to start Amor de Días strike you?
Maclean: It struck us after we’d worked together on (2007’s) God Save The Clientele. We did a song together called “No Dreams Last Night,” which is nylon-string guitar and the two of us singing. We toured Spain together a little while afterwards, Lupe’s band Pipas, with me opening for them playing solo, and it occurred to me then that it would really work, that as well as admiring what Lupe did with Pipas, we could do something different on our own.
Núñez-Fernández: Our earliest recorded collaboration was actually circa 2003. We’re both on Tomorrow Is Again, a record by the Relict (Innes Phillips’ band). Alasdair played guitar and I sang on it, along with Pam Berry (of Black Tambourine, etc.) and various other London-based musicians. We recorded our parts separately, and I remember how exciting it was to listen to the final result. It sort of broke the ice and started us talking about why we both made our music. Maybe it planted some kind of seed.

It seems you kind of kept the collaboration secret until the record was done and ready to be released. Was that intentional?
Maclean: It was only a secret in that no one asked us about it. We didn’t have a label when we started, so we just recorded and got on with it without bragging to anyone. For all we knew, it could have ended up a disaster, so we didn’t want to jinx it.

You guys worked on the album for more than three years. What kind of schedule did you adhere to recording it?
Maclean: A quite slow and slack one. No more than one session a fortnight, I don’t think so. Sometimes a couple of months break. That’s how I remember it anyway.

Were the songs written by you guys together or separately? What was that process like?
Maclean: Some of the songs are a 50/50 collaboration, like “Foxes,” where I wrote the beginning part, then Lupe finished it off with the lyrics and tune. Sometimes I added a little bit to her song, like the backing vocals in “Dream,” and sometimes it’s entirely one or the other of us.
Núñez-Fernández: It’s hard to answer that question. Even the songs we wrote separately were heavily influenced by each other’s contribution—e.g. “Stone” (probably the slowest song I’ve ever written) is in my mind Alasdair through and through, because of his guitar playing and his presence in the lyrics and the pace of the music. Same with “Late Mornings.” And “Birds” is a total collaboration as well: Alasdair did the prepared piano piece that wraps around my voice/bass line, and I’m not sure either would sound right without the other.

“Harvest Time” was on the last Clientele album, but you guys actually recorded your version first, right? What about that song made you want to do two versions of it?
Maclean: Yeah “Harvest Time” was recorded by Amor de Días first. It ended up on the schedule for the Clientele’s Bonfires On The Heath (2009) because at the time I was panicking because I thought we didn’t have enough good songs for that album. The Bonfires On The Heath was released before the Amor record. The Clientele’s version is simpler and smoother I guess, but the Amor version is the definitive one for me. It has more of that sense of foggy, hallucinatory yearning that I had in my mind when I wrote it.
Núñez-Fernández: Al and I were hanging out when he wrote the song, and I just sang along with him on the chorus. At that point, it didn’t really even have any lyrics, so it was just pure, exhilarating singing. I love the Clientele version, but I think there’s something in our recording that captures both the lightness I heard the first time we sang it, and it intensifies the song’s imagery.

How did the guest appearances by the likes of Louis Philippe, Damon & Naomi and Gary Olson come to happen?
Maclean: We just asked them. They’re friends of ours from years of touring and making music. In the past, I’ve played on Ladybug Transistor and Louis Philippe records. We both meant to make it to a session for the last Damon & Naomi record but couldn’t get to Boston in time.

What is the lineup for Amor de Días when you guys play live?
Maclean: The core lineup is Lupe and me on Spanish guitar, but we’ve recently had Heather McIntosh (of the Instruments, who also contributed to our record) sit in with us on cello, Danny Manners on double bass and Anne Gray on tenor recorder. Hopefully, we can convince Howard Monk to play drums with us live at some point, too.

How do you think your maiden U.S. tour with Damon & Naomi went? Do you look forward to more touring?
Maclean: It went extraordinarily well musically. I’ve never enjoyed touring so much. The control over how we sounded and the pleasure in hearing the other guys play was amazing. Heather McIntosh and I sat in with Damon & Naomi on cello and lead guitar so we were effectively playing two sets a night, which is usually a bit wearisome, but in this case it was pure pleasure all the way.

Do you have plans for another album?
Maclean: Yes, although nothing concrete. Ideas being floated are for a disco album, a minimalist-guitar instrumental record and an album written and recorded in an almost improvisatory way. Also maybe something lo-fi, as I’ve been making too many hi-fi, ultra-arranged records recently.
Núñez-Fernández: You forgot the spoken-word album. I’m also going to see if I can get Alasdair to sing a song or two in Spanish. Something poppy. It’s gonna happen.

What is the status of the Clientele and Pipas right now?
Maclean: The Clientele are on hiatus until I have enough good Clientele-related ideas to make a smashing record with them. However long it takes—hopefully not forever.
Núñez-Fernández: Pipas is back at work on songs for a new album, hopefully to be released sometime in the fall.

Lupe, do you live in London or Spain or split time between the two?
Núñez-Fernández: I’m in London a lot of the time but go back and forth to Madrid and to the States for long stays throughout the year. It’s all home to me.

What do you guys have planned for the rest of the year?
Maclean: We’re playing hundreds of gigs in England and hopefully some in Spain, too. I really hope to get recording later this year. I’ve also been playing a bit of guitar with Comet Gain and Louis Philippe.
Núñez-Fernández: Playing shows in new places and getting back into the studio while everyone’s away on vacation this summer.