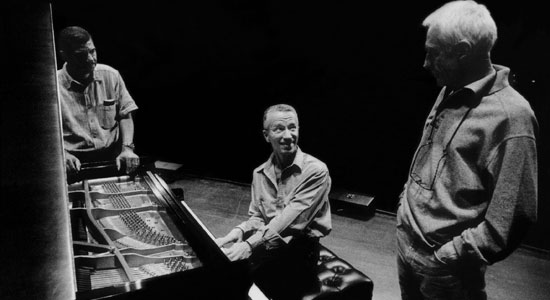 In 1971, Keith Jarrett released a double album on Columbia Records titled Expectations. At the time, Jarrett had just left Miles Davis’ band and was one of the bright young faces in jazz. Forty years later, performing at the Opera House as part of the Copenhagen Jazz Festival, the esteemed Keith Jarrett Trio has generated a whole new slew of expectations. Would Jarrett be in a good mood? Would he object to the audience snapping photographs or coughing loudly to the point that he would cut the show short as he had done previously in Montreal, Perugia and other festivals around the world? Of course, the Copenhagen audience had their own expectations as well, and most folks were simply looking forward to seeing one of the finest piano jazz trios working today.

Things started out well enough with Jarrett, bassist Gary Peacock and drummer Jack DeJohnette performing “Green Dolphin Street,” but things broke down quickly during a version of “Night And Day” when Jarrett noticed a buzz coming from the amplification of Peacock’s bass. Stopping in effort to address the sound problem, Jarrett turned to the crowd and rhetorically asked, “Isn’t this fun?” It wasn’t. Forging on uncomfortably, Jarrett soon stopped again, this time complaining about the recital hall’s dry acoustics and explaining that the room wasn’t a good milieu to perform ballads. By this time, Jarrett’s discomfort had infected the audience, and many people were ill at ease. The band struggled through a full hour without ever hitting its stride, and it seemed that the chemistry needed for a magical performance was slipping out of reach.

During the intermission, the stage crew replaced Jarrett’s piano with one of the two spare Steinways they had backstage (per Jarrett’s expectations). Thankfully, the show’s second half unfolded without incident, and the trio attained some of the elevated playing that we’ve come to expect. From a lighthearted version of “Tennessee Waltz” to “Someday My Prince Will Come” and a cool bluesy vamp Jarrett often uses to launch into his amazing improvisations, the show finally came together. When it came time for the encores, some fans disregarded the requests for no photographs, and it looked like the show might be cut short after all.

Then, rather than Jarrett admonishing the crowd as he has sometimes done, DeJohnette simply went to the microphone and politely asked people to refrain from taking photos, and the Danish crowd complied. Two great encores ensued with many bows and ovations, and the show was mostly redeemed. Overall, Jarrett’s reactions were a little too disruptive, and the comfort level was not at an all-time high. Besides that, it seems that Jarrett has painted his group into a corner stylistically, and his demand for absolute perfection has a wearying effect on all involved. The Keith Jarrett Trio may still be the best band in the land, but that doesn’t mean it’s always worth it to see the threesome perform.

For me, the only thing to do was to take a cab across town and catch a midnight set by DJ Krush to clear my head. The Japanese turntablist was in particularly fine form, sampling everything from Funkadelic’s “Maggot Brain” to DJ Shadow. The beats were deep, the sound was crazy psychedelic, and the young crowd had a really great time. A perfect antidote to the aesthetic pretensions and great expectations that I’d struggled with earlier that evening.