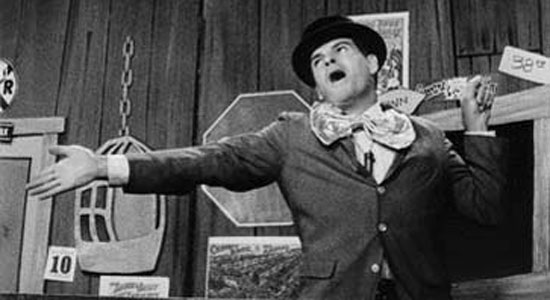 Fleming: In the early 1960s, I was living with my parents at Homestead AFB in Florida. Everyday after school, I’d tune in to Jumping Jack’s “Four O’Clock Club” on WLBW from Miami. One day, I was the lucky kid who got a call from the show, and I was able to answer the question of the day (I can’t remember what) and won a Hands Up Harry game. It was a stand-up cowboy that you would shoot at with a dart gun. First you would shoot Harry’s hat off and his arms would pop up, drawing his guns. Then you hit his belt bucket and his pants fell down, classic!

One reply on “From The Desk Of Don Fleming: “Jumpin’ Jack’s Four O’Clock Club” And “Hands Up Harry””

I too lived there in early ’60’s, in Daytona during the Cuban Missle Crisis. Fun! Remember the scary training movies, hiding under a desk and bomb drills?

Anyway, one show they seemed to have there I never heard about again after moving north again, was McKeever and the Colonel, about a Bilko/Bueller-type kid at a military academy alway up to something. Ring a bell?