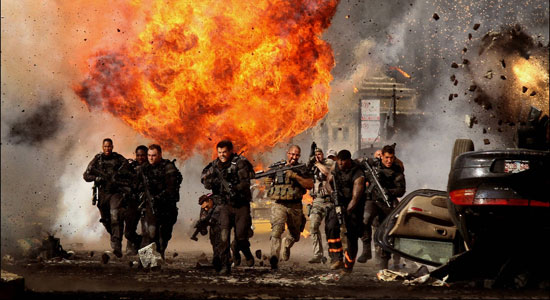 I took my grandson Nathan, a 14-year-old who must appear directly in this movie’s marketing crosshairs, to see Transformers: Dark Of The Moon yesterday. I was well aware how bad the first two Transformers stunk up the joint critically. But actually being there, cowering as a horde of giant robots crushed each other and tossed humans around like dandelions on the front lawn, was a brain-shriveling experience I won’t want to repeat. Next time around, director Michael Bay might think about omitting the human “actors” altogether. A script? Not really necessary. Get right down to the metallic carnage to cut at least an hour off this baby. Come on, is (not-so) pretty boy Shia LaBeouf (or a wax facsimile thereof; hard to tell) skittering around a trashed Chicago, looking stressed, supposed to be someone kids can identify with? Unh-uh. As for underwear model Rosie Huntington-Whiteley (the new babe who replaces Megan Fox from the first two TFs), she’s so lifeless she makes LaBeouf (at least six inches shorter than Rosie) look like Laurence Fucking Olivier by comparison. Close-ups of Rosie’s botoxed face give the impression her “lips” were just smashed by a very large brick. And what were old troupers Frances McDormand, John Turturro and John Malkovich doing here? Answer: a bunch of capital S’s with two lines drawn down the middle. The final, excruciatingly loud, battle sequence with the good giant robots swinging CGI haymakers at the bad giant robots must have clocked in at a staggering 50 minutes. You are praying it will stop about 10 minutes in, but you’ll be looking at your watch at least 15 more times before it’s over, pal, with a migraine percolating. When the credits finally rolled, it felt like an ambulance attendant had slapped those two electric things onto your chest that bring you back to life. By then, you may want to ask the guy to, please, just leave you alone. Death, where is thy sting? Final verdict: Nathan thought the movie was just “OK,” certainly not what the suits in the board room of the Transformers franchise wanted to hear.

One reply on “Movie Review: “Transformers: Dark Of The Moon””

Sorry dude I won’t hear a bad word said about the transformers movies. They were always going to be crap action flicks, but thats exactly what the viewers wanted. An hour and a half of kick ass robots cars and trucks, with the occassional hot chick thrown in.

What more could you ask for?
KRE-O Transformers