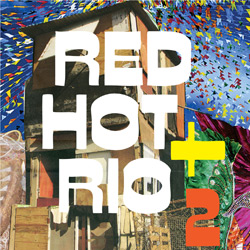 After a period of relative silence, the HIV/AIDS activists of the Red Hot Organization are hotter than ever. By A.D. Amorosi

You could say it had finally gotten under John Carlin’s skin. It was right before Halloween 1990 when the New York City entertainment lawyer—angered by the travesty of HIV/AIDS, and the lack of adequate care and information being provided its victims—released the first project from his Red Hot Organization.

It was the AIDS charity album Red Hot + Blue, and it featured the likes of U2, Annie Lennox and Tom Waits performing haunting renditions of songs by Cole Porter, the legendary Broadway and Hollywood songwriter. The eerily poignant tunes (“I’ve Got You Under My Skin,” “After You, Who?” and “You Do Something to Me,” for instance), many unheralded since the 1940s and ’50s, were dedicated to AIDS-stricken intellectuals and artists that Carlin had known.

The album changed everything.

That first Red Hot collection’s high standards for artistry—to say nothing of the attention and money it raised—redefined the game for the multi-artist tribute compilation. That first edition sold over a million copies worldwide, raised millions for AIDS charities, such as AmFAR and ActUp, and won an ABC network primetime slot on World AIDS Day.

“The goal of the Red Hot Organization—my goal—has always been to produce credible things that people want,” says Carlin while gearing up for the release of his organization’s latest offering, Red Hot + Rio 2, a Tropicalia follow-up to 1996’s samba-flavored, Antonio Carlos Jobim-exalting Red Hot + Rio.

“The Brazilian artists in particular were hungry to do this,” says the now 50-year-old Carlin. “They wanted to reinvent themselves, as well as their music, while considering the cause we were recording this for.”

But it wasn’t just the artists who welcomed reinvention. Just two years ago, without a little reinvention on the organization’s part, a 21st Red Hot record would have been unlikely, if not improbable.

When asked why he’d revisit the idea of Rio, Carlin notes the difference in the records’ vibes—Rio 1’s got soft, bossa nova blips and hips, while Rio 2’s a collection of wild, rhythmic sandblasts. But if we’re being frank, the main reason Red Hot can return to Rio with full two-disc, all-star gusto is the complete resuscitation of the benefit behemoth via 2009’s Dark Was the Night.

Unlike 2002’s Red Hot + Riot: The Music And Spirit Of Fela Kuti (critically lauded but something of a flop, sales-wise), Dark Was The Night ran wild, generating proceeds of more $1 million a new crop of indie weirdos recording under the production of the National’s Aaron and Bryce Dessner. Bon Iver, Yeasayer and more helped make Dark shine.

“That really revived the series,” says Carlin. “And it was a pleasure to immerse myself and Red Hot in the indie rock scene after so long.” (Red Hot’s last foray, No Alternative, featured Nirvana, Smashing Pumpkins and Sonic Youth, and came out at the height of grunge’s minute in 1993.)

While working on Dark, Carlin found that many of its artists, from Arcade Fire to Antony Hegarty to Devendra Banhart, had a love of Brazilian music and listed Red Hot + Rio as a touchstone in their appreciation. It was as if Red Hot had discovered its offspring.

Carlin also learned that his affinity for the harder Tropicalia was shared by many. So he floated the Rio 2 idea past Chuck Mitchell, who’d run Verve when that label released Rio 1. “We remained friends, and he helped make the deal with E1 where he is now.” E1 was enthusiastic enough to cover the recordings’ costs and distribution. “Fifteen months later,” says Carlin, “we had Red Hot + Rio 2.”

It seems so simple. Then, why the mid-2000s slump? “The music industry was [in trouble],” figures Carlin. Red Hot’s basic economic model forgoes donations, instead producing commodities that audiences crave, buy and share with friends. That generates revenue, and HIV/AIDS charities benefit.

That model became fraught with headaches within the last decade of the music industry. Carlin says it became difficult to do charitable compilation albums because so many others had gotten into the game.

Carlin also seemed a bit demoralized by the cool reception to the Fela project. “That was the best record we had done musically. I love that record. It did okay, and we still gave away some serious money to African youth organizations, but it didn’t set the world on fire or find its audience.”

And perhaps, intellectually, Carlin found himself more focused on a children’s development company called Funny Garbage that, for the last 15 years, has been at the forefront of digital media. “That felt more like punk rock did at its start than music [had].”

Though Carlin paints a picture of himself as a fairly quiet and calm person, Red Hot was motivated by powerful anger.

“At that time, a huge percentage of people that I knew, loved and worked alongside were sick or dying,” remembers Carlin. “My spiritual mentors were the Beatles, and I was profoundly influenced by the way in which John Lennon and George Harrison used their music for political activism.”

Carlin didn’t want to just march, or make a quilt. He wanted to brand his version of giving. A tribute to Cole Porter just popped into his head. “Porter’s music hadn’t been addressed since the days of Frank and Ella.” His lyrics seemed to fit the historical moment really well. And the tribute album was still new at the time. We were only second to those truly amazing projects that Hal Wilner had started.”

Still, getting started was a headache, due to America’s fear of the still misunderstood HIV/AIDS virus and the stigma attached to all things gay—to say nothing of releasing a charitable album at a time of great, greedy profitability in the entertainment industry

“We were originally doing the first album through Warner Bros. until Mo Ostin stopped the project,” remembers Carlin. “It wasn’t fear of AIDS on his part. Literally, they weren’t doing charity records. They’re not politically amoral; they are capitalists. They said, ‘If you do a charity ball, we will buy a table.’ It was profit versus no profit. Asking artists to do something gratis compromises their position as businessmen. At least that’s what they said.”

Carlin scrambled to find another label for that first record (Chrysalis), but lost several nervous artists along the way. Which is why Red Hot still goes for three to four times the number of artists that it eventually lands.

“Some artists didn’t want to do it because they didn’t want people to think they were gay. Which is funny,” laughs Carlin, “because about half of the ones who said it were gay.”

Having U2 on board helped. “Having Bono and U2 step up at the height of their fame and put their macho, hetero shoulders to the wheel was considerable.”

Guys like that made it feasible for hit-making pop stars—from George Michael through Red Hot + Rio 2’s John Legend—to expand the brand with their participation. It’s those artists who, in Carlin’s estimation, are the bold-face names who draw mainstream audiences, as well as pay into a cause they might not otherwise.

“If the first three names are at the top in terms of success and prestige,” he says, “we get checked out. People stay for the depth.”