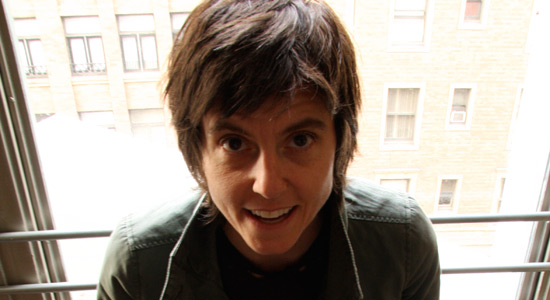 Isn’t it time you had Tig Notaro at your party? By Patrick Rapa

It seems pretty unlikely that Taylor Dayne and Tig Notaro would ever cross paths. One’s a pop star who scored a series of huge hits in the ’80s: “Love Will Lead You Back,” “Tell It to My Heart,” “Don’t Rush Me,” etc. The other’s a deadpan standup comedian with an indie rock background. But both live in L.A. and work in showbiz, and perhaps that’s enough to explain the remarkable frequency with which they’ve run into each other. Nothing can explain how weird and wonderful those interactions have been.

Notaro recounts a number of these chance meetings on her debut album, Good One, released August 2. The scene generally goes like this: Notaro spots Dayne at a party or a restaurant, and politely interrupts to say how much she likes her voice. The singer’s wildly different reactions to the exact same situation—the best of which is probably “my speaking voice?”—make the bit feel like some strange sociology experiment on taking compliments. At the end, Notaro imagines Dayne relaunching her singing career on the basis of these eeri­ly identical interactions, calling her manager to say: “My fans miss me. They love me. I mean, sure, they’re a bunch of he/she-looking robots … ”

The Mississippi-born Notaro, meanwhile, is slowly assembling her own army of fanbots. She’s made repeat appearances on The Sarah Silverman Program, did the early rounds of Last Comic Standing in 2006, and recently scored a one-off spot on NBC’s Community.

Right now, the needle’s in the “cult” and “comedian’s comedian” range. Silverman, Doug Benson and Marc Maron all have sung her praises. When I saw her play Esther’s Follies at SXSW in Austin last April, she killed with her casual, in-the-moment style. Hopefully more people will catch on, thanks to Good One, the first of an expected trio of albums on indie rock label Secretly Canadian.

Music has figured in the Tig Notaro story before. In the mid-’90s, she ran Tignation Promotions, a one-woman booking and management outfit in Denver. “I wasn’t really good at it, now that I think back,” she says via email (her preferred interview method). “It exhausts me to think of life before comedy.”

A guitarist and drummer, she did try the performance side of things. “I was in a couple of bands: Chinese Laundry and Think or Thwim. We were basically nothing. Nobody ever heard of us because we never left the basement. We maybe only practiced once or twice, and then went on farewell tours immediately.”

Her work in the music biz led her to Los Angeles, and the experience has helped shape her comedy career. “It made me realize the importance of working hard at what you do, so that your representation has something to work with,” she says. “Many artists think that they are mind-blowing at what they do, and a lot of times they are, but you have to show some initiative.”

For her, that means a multi-disciplinary approach. The deluxe version of Good One comes with a DVD of the much-anticipated Have Tig at Your Party, which is essentially Notaro standing around for an hour—the idea being that you let it play in the background, like those fishtank and burning log tapes from back in the day. (If that’s too high-concept, check out the extras with Zach Galifianakis, Chris Fairbanks and more.) In May, she launched Professor Blastoff, a free weekly comedy/philosophy podcast with her funny friends Kyle Dunnigan and David Huntsberger. Notaro’s also been making headway on the book she’s been working on for a while, having just started working with a literary agent. “It started out being about my childhood, but then it became all about your awkward teenage years, Patrick.”

But now that the album’s out there, isn’t she worried about running into Taylor Dayne?

“She’s actually heard about it. Her agent called my manager a couple months ago and said that Taylor was aware of it, is a fan of mine and would love to work with me someday. She must have found out who I was after I kept running into her,” says Notaro. “When she says she wants to work with me someday, I’m hoping she means duet. I’d love to turn ‘Love Will Lead You Back’ into a duet for us to sing because it’s just so appropriate.”

Hopefully they get along, given the frequency with which Notaro runs into her.

“She’s sitting next to me right now.”