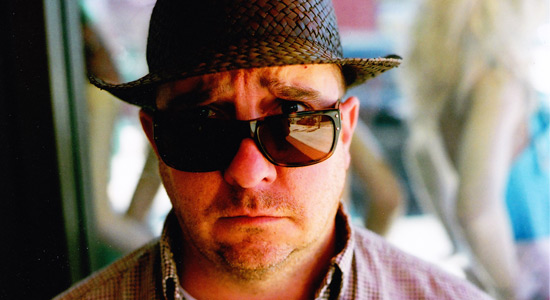 Stephin Merritt is nothing if not precise—in his speech, his painstaking approach to conceptually specific projects (including, most famously, the Magnetic Fields’ self-explanatory 1999 opus 69 Love Songs), and, especially, in his meticulously well-formed songcraft. Uncharacteristically, then, Obscurities, a new compilation issued via Merritt’s 1990s home base Merge Records, offers a peek under the rug of his tidily appointed catalog, with a delightful assortment of lost gems and loose ends: b-sides and compilation tracks from multiple Merritt outlets (the Magnetic Fields, the 6ths and the little-known Buffalo Rome), and a handful of previously unreleased numbers, including several from an in-limbo musical project whose premise, as he described to me, sounds like a logical occasion for 6.9 billion love songs. He spoke with me by phone from Los Angeles—where he’s been living for five years, although, he said, he still spends “a quarter to a third” of his time in New York, where he keeps a tiny apartment “the size of his living room in L.A.”

MAGNET: I’ll start by asking about your upcoming compilation, which I’ve been having a lot of fun listening to. Was it fun to put together?
Merritt: Um, no. No. It was agony to put together. I had to listen to everything obscure that I’ve ever done, and most of the obscure things that I’ve ever done are rightfully obscure, so it was really depressing. But I managed to cull from the morass of… oh, that’s a mixed metaphor. I like listening to the final product. But it took a lot of suffering to get there.

About how much material was there that you weeded out?
At least another album’s worth. I toyed with the idea of making two records—one called Good Obscurities and one called Bad Obscurities.

Deserving Obscurities.
Yes. The bad obscurities would include a lot of the covers that I’ve done, which for some reason never seem to turn out well.

Why did you decide to put this compilation out, and why now?
Hm. My manager, Claudia, has been needling me to do it for years. Merge really wanted to put out the seven-inches and stuff that they’ve released in some saleable form. Because apparently you can get some of this stuff online, illegally. Illegally, but not legally. So, now you can get it legally. And I had the time to it. I suddenly had the time to do it because some other [plans] fell through, so I was able to spend a month putting together the record. That’s why now.

What’s the story with Buffalo Rome?
That was me and Shirley [Simms] in the mid-’80s. I made an early version of what would become [the Magnetic Fields’ debut] Distant Plastic Trees, and Shirley sang it. We did, I think, an edition of 50 cassettes, and they were sold through the K Records catalog.

I take it that’s a play on “Home On The Range.”
Probably. Yes. But it’s also the name of an actual railroad; there was a Buffalo-Rome railroad, so I believe “Home On The Range” was a play on Buffalo Rome, R-O-M-E. [ed: Google fails to substantiate this, but fair enough.]

What’s the story behind The Song From Venus? There are three songs here from that project, right?
Yeah. That’s all we recorded. They were recorded as a demo for potential producers of our screenplay to get a sense of what the music would sound like.

What’s the gist of the screenplay?
It’s a sung-through musical about some love affairs that end unhappily because they’ve been prompted by this record that comes from Venus. It’s a form of invasion of the Earth: The Venusians have released a record which makes Earthlings fall madly in love with whoever they are with when they hear the record. So, chaos ensues. And soon the Venusians are taking over the Earth, and Daniel [Handler, aka Lemony Snicket] and I don’t agree on the ending. I say that it should be an unhappy ending, where there’s an odd number of people in the world, and the odd number is our hero, but Daniel thinks that we’ll have an easier time selling this to producers in America if it’s a happy ending, and the Venusians take over the world and everyone is in love, and everyone’s happy, the end. Universal love is accomplished, the end. These are two very different endings that we have yet to agree on.

Was that disagreement part of what doomed the project?
Oh, it’s not particularly doomed; it just hasn’t been finished.

It’s still in the works?
It’s sitting there; we haven’t worked on it in quite a while, but we could potentially work on it again.

Is there a role you have in mind for Beyoncé?
The lead.

Yeah, you have some experience with that.
Yes. You just change the o’s at the ends of the words to a’s.

Do you align yourself with the worldview expressed in “When I’m Not Looking You’re Not There”?
I consider those lyrics to be a dilation of a particular mood. It’s a sort of heavy metal lyric, I think. An expression of paranoia. When I smoke pot, which is extremely rarely, because I don’t like it, I feel like that. It’s hard to get me to smoke pot because the paranoia I feel is much more unpleasant than any of the snacks that I’m wolfing down. There’s another song on the record that has a similar worldview, but I can’t remember what it is right now.

“Scream Until You Make the Scene”? “Rats in the Garbage of the Western World”?
They all have pretty bleak outlooks, I guess.

How do you feel about that now?
I like it. I actually think that the song is pretty accurate.

I’m interested in talking about the shifts between your work in the ’90s and your work since then, especially in terms of your songwriting. What are the main things that stand out to you in comparing those two periods—or do you tend to think of them as not distinct?
Hm?

Do you see major changes in your approach to songwriting between, say, pre- and post-69 Love Songs?
Well, when I put out 69 Love Songs, I soon afterward interviewed Tom Lehrer when his box set came out. And he said that he doesn’t approve of false rhyming, and he thinks that he and [Stephen] Sondheim, with whom he went to summer camp, are the last bastions of strict rhyme. So, I took that as a challenge, and ever since then I’ve used only strict rhyme. Whenever there’s a false rhyme in any of my songs in the 21st century, you can tell that that song, or at least that part of the song, is from earlier. So, lyrically, I have constrained myself to the showtune style of strict rhyme. Other than that, I don’t think I’ve changed my songwriting particularly, except that I try to expand it ever outward. But I still have particular chord progressions that I like, which cause some repetition.

What do you mean by expanding it outward?
Genre-wise. I try to include some new genres and new perversions of genres every time I make a record.

It seems to me that one difference is that you impose a lot of constraints on yourself, perhaps more—certainly the 69 Love Songs project was one constraint, and most of your projects since then have had some specific limiting factors, and you mention this rhyming constraint. Do you feel like that has had any other sort of indirect effects on the kinds of songs you write?
Well, I also used constraints creatively in the ’90s—I had the House of Tomorrow EP which is all loop songs, and Charm of the Highway Strip is all songs about travel, and that sort of thing. So, in that way I don’t see any particular difference.

I guess to me… I don’t know if you’re thinking about things this way, but often individual songs will feel constrained just on the level of the song. One way I would think about it is that the songs, maybe starting with 69LS and since—and there are definitely exceptions in both directions—tend to feel tidier, like there’s one guiding idea and everything else in the song is clearly in service to that central premise, whereas before there might have been more lines that were more impressionistic or didn’t relate quite as directly, but still had an evocative effect. I’m thinking of songs like “The Desperate Things You Made Me Do” and a lot of the songs on Holiday.
You may be right. But we have to end now.