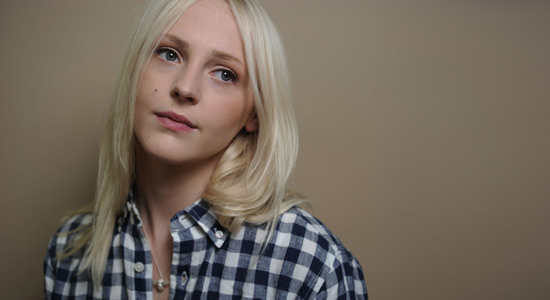 British folkie Laura Marling sincerely does not want to freak you out. By Patrick Rapa

On a trip through India last year with her old backing band Mumford and Sons, the young British folk-popper found herself against some loud, rude crowds in small pubs. Her graceful voice and poised guitar were no match for the drunken din of one gig in Calcutta. After shouting her way through four songs, she left off the stage, defeated. Call it a learning experience for the 21-year-old.

“It was amazing, but it wasn’t right. The reason for being there wasn’t right.” She sighs into her cell phone. “If you’ve paid to go watch music over there, you want to be entertained. It’s not about going to watch an artist that you love; it’s being entertained for an evening. Which is totally legitimate, [but] it’s something I’ve never come across. I’ve never ever considered myself as some form of entertainment. And I don’t think I really want to be that.”

Marling’s sound—the one that drew so much attention for her first two albums and will do so even more on her stunningly gorgeous third, A Creature I Don’t Know (Virgin) — is best known for its moments of odd delicateness and defiant crescendos. She does raise her voice and strum hard, when the time is right, but that’s not her wheelhouse. For her, it’s not about volume or vigor anyway.

“In music that I like, music that I listen to, I think the most powerful thing is sincerity. A certain amount of sincerity. That doesn’t necessarily mean that they have to be baring their soul to you. It’s just, when you believe what they’re saying to you, that’s what makes it powerful,” she says. “In a very unromantic way, the reason my songs are delicate is because I can’t sing very loud.”

That said, A Creature I Don’t Know does find Marling rattling the bars of her gossamer cage. “The Muse” kicks things off with a galloping pace and some jazzy swagger, and the album goes down swinging with the old-timey, steady-strumming sing-along-able “All My Rage.”

“Just before we went into the studio, my dad gave me his old electric guitar, and then I went and bought—really stupidly; you should never do this before you go into the studio—I bought a POG [effects pedal] and a Kaoss Pad [midi effects processor],” she chuckles. “And we nearly came out with, like, a grunge album.”

Not really. Creature is steadfastly pristine and assured in its folk cred, be it the traditional campfire-on-the-heath variety or something more spooky or poppy.

“I demoed it all at home and did the foundations of the arrangements, and then took it to the band. We worked out ways of accentuating lines that I thought were more important and slightly hiding lines that I thought were a bit pants. That’s my process,” she says. Then it was off to RAK Studios in London to work with producer Ethan Johns (whose CV includes albums for Ryan Adams, Rufus Wainwright, Emmylou Harris). “I always had it drummed into me that the craft of making music is precious and has a value. I don’t begrudge home recording, but I think music has to have value and it has to be treasurable.”

That said, her process does have some caveats. Like, she doesn’t edit or rewrite a song once it’s done. And, in the studio, she prefers the honesty of laying down the vocals in one or two takes. “After the second take, you’ve forgotten why you ever wrote a song ever. You’ve forgotten what it’s all about, and why you care about it,” she reasons. “My voice is always better the first time and not the 10th time.”

Creature’s first single, the charming and chilling “Sophia,” finds Marling tracing each crystalline note she sings with a couple gently plucked strings. “Who’s been touching my skin/Who have I been letting/Shy and tired-eyed am I today.” And later: “Rarely I weep/Sometimes I must/I’m wounded by dust.” Things float toward the abstract when a swooning cello and a celestial choir show up, but the acoustic guitar and head-bobbing beat help pin your ears to the earthly realm.

And she’s right—her sincerity is what really sells it. All the more magical when she goes on about her preference for storytelling over heart-on-sleeve confessional lyrics. “I’m not sure I have the innards. I’m not sure I’ve got the guts to get up and sing that kind of stuff,” she says. “I’m also somewhat of a magpie, I guess. I like watching people. As creepy as that sounds.”

Creepy? Nah. But if you search for “Laura Marling” and “haunting,” you’ll come up with a million and a half results. (And climbing. The number seems to have risen by hundreds of thousands during the two weeks between conducting the interview and writing this article. Google moves in mysterious ways.)

Marling ponders this information. “I think I’m very comfortable with that. A personified haunting that’s… I don’t know. I wouldn’t want to freak people out,” she says.

Well, nobody’s calling you a poltergeist. You just write songs that seem to stick with people long after they’re over.