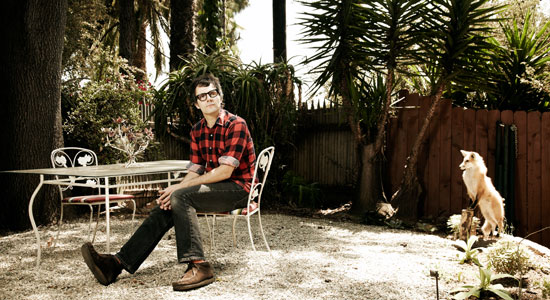 With a major-label distribution deal right out of the chute, Candy Butchers seemed destined to follow in the footsteps of other smart, song-focused, melody-driven, ’90s outfits like Ben Folds Five and Fountains Of Wayne before the proverbial window of opportunity slammed shut circa 1997. Since then, seemingly unflappable leader Mike Viola has kept plugging away, fending off adversity in his personal life (his first wife died of cancer) and overall public indifference to get his music out there, whether as himself, under the Candy Butchers moniker, on film soundtracks or elsewhere. Viola’s new solo release, Electro De Perfecto (Good Morning Monkey/Hornblow), is a slickly produced celebration of a versatile songwriter in his prime, one who deserves a little more love. MAGNET recently spoke with Viola, who will be guest editing our website all week.

MAGNET: Electro De Perfecto, eh? So that must mean this is the perfect Mike Viola album? And if so, how do you follow up perfection?
Viola: The title is a non-sequiter suggested by my six-year-old daughter, Izzy. She was learning Spanish in school, and it was obvious to her that this record is “electro de perfecto.”

Confronting—or ignoring—middle age is an overriding theme on Electro. It’s something I can certainly relate to. And yet, its songs are hardly about surrendering to a life of numbing, domesticated indifference. How are you coping with your post-40 years? Hopefully better than “Me And My Drinking” implies.
Definitely not surrendering—more about facing it head on. Admiring the decay. Nothing about middle age should be numbing; it’s the opposite if you choose to keep your eyes open and look around you. It’s terrifying in a beautiful way. I mean, your body is decaying; your clothes don’t fit you anymore. So you look to escape. You start to look for that old fire again. You get loaded or you buy things you can’t afford—or start watching a bigger TV. It’s easy to hate your spouse; so easy, in fact. What’s hard? What’s the most punk-rock thing I can think of right now? Staying married, keeping my child’s family intact.

The beginnings of Electro came out of your work with session-drummer extraordinaire Victor Indrizzo on the Get Him To The Greek soundtrack. Care to expand?
I just wish we’d met when we were 16; we play like we’re 16, like our parents are upstairs. We play like there are girls with Exersoles and Jordache jeans waiting for us to drive them home. A little stoned—the old kind of weed.

The album’s “produced” feel couldn’t be more of a departure from your last solo album, 2005’s live and mostly acoustic Long After Dark, which is set for re-release, correct?
Actually, my last album was Lurch. But, yeah, Electro De Perfecto is a departure nonetheless. It really was playing with this band and being at this place in time that dictated the change. It wasn’t a conscious effort to rock; we just couldn’t help it.

Tell me about Lurch. I’m not familiar with that one.
It’s self-recorded with my buddy Ducky (Carlisle). We did it in his basement. I play everything but drums on it. If you like the Beach Boys’ Sunflower or Paul McCartney’s Ram, you’ll love it. I borrowed from the best on that one.

We spoke during that time, and you were in quite a different place, living in New York with your wife and child. You’re in L.A.’s Echo Park now. What prompted the move?
Somebody bought my building, and we got booted out. I also made some money working on the soundtrack for Walk Hard: The Dewey Cox Story, so we packed up and moved west. The move has been one of the best decisions of my life.

On a more nostalgic note, I saw the original Candy Butchers at South By Southwest in 1996. As a recall, Todd Foulsham was right up front with his snare drum, along with Fountains Of Wayne bassist Adam Schlesinger. Didn’t you have a small horn section, as well?
We did. At one point, that band had strings, horns, pedal steel and a dancing bear. We went from a duo to this mini-orchestra overnight. I’m still not sure how that happened.

To this day, the Live At The Bon Bonbonniere EP is a favorite of mine. Tracks like “Canned Hunt” and “Til You Die” were relentlessly efficient and vicious yet hilarious in their sentiments, not to mention catchy as hell. Looking back, do you feel that you took that stripped-down format as far as it could go?
That’s super-perceptive of you. No, I still love being stripped-down; it’s all in the arrangement, really. I love stripped-down recordings.Electro De Perfecto is just three guys in a room with very minimal overdubs, but it sounds produced because the arrangements are tight.

Around that time, your soundtrack work started on a high note with the Grammy-winning That Thing You Do. Do you see movies as more of a creative or financial outlet?
I love working on movies. I’ve been so lucky to be able to do that, being part of a little army of people, instead of just a band. There’s millions of dollars riding on somebody’s ideas, not just thousands. It’s surreal. A success is a true success and a failure … You don’t talk about the failures.

2 replies on “Q&A With Mike Viola”

I love Mike’s stuff so thanks, but how do you not even know about his previous album?

It will be awesome to read Mike’s stuff in here.