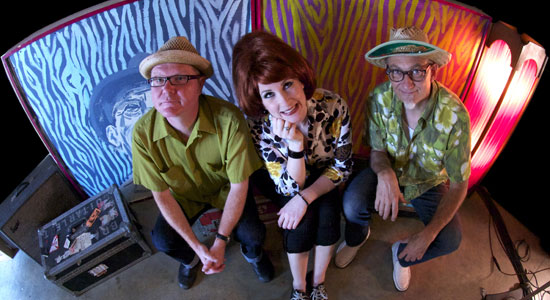 Anyone have any idea how long Southern Culture On The Skids has been around? Would you believe since 1983? Time flies. (Clever response: You cannot, they’re too erratic.) The current lineup of SCOTS features Rick Miller (the one constant since its inception) on guitar and vocals, bassist Mary Huff and drummer Dave Hartman. If you haven’t heard what they sound like, an educated guess that included Creedence Clearwater Revival, the Cramps, Tav Falco’s Panther Burns and Man Or Astro-Man? might be pretty close to the bone. The trio’s most recent album, Zombified (Kudzu), came out just in time for graves to open so the dead can have one last stagger around the countryside. Miller dialed MAGNET from behind a weed-choked crypt somewhere in the deep South. He will also be guest editing magnetmagazine.com all week.


MAGNET: What I hear when I play your stuff is, obviously, the Cramps, Tav Falco’s Panther Burns and an old country guy called Jumpin’ Bill Carlisle.
Miller: The first two I can say yes. All the country stuff I just kind of absorbed from my dad. Lots of Roger Miller from when I was a kid. “Kansas City Star,” I think, is my favorite.

I actually saw Roger Miller play with Herb Alpert & the Tijuana Brass, a very long time ago.
Gosh, that must have been awesome. Those are two of my favorite artists. Have you every heard of a guy named Billy Strange?

Sure, he had the first hit with the James Bond theme back in ’64. And the guy I work for at Sundazed Records, Bob Irwin, has an instrumental band called the Pluto Walkers whose two main influences are Billy Strange and Al Caiola.
I just found all the Billy Strange stuff on Amazon. They’ve reissued all his GNP/Crescendo albums. I got his album of Mexican hits and Billy Strange Plays The Hits Of Roger Miller. I love the guy. He’s got the best icepick kinda guitar tone. It sounds so good. George Barnes is great, too, the album called Guitar Galaxies. You used to be able to find all that easy-listening stuff for nothin’ at the thrift stores. Ferrante & Teicher albums, for example.

Yeah, I like a lot of that stuff some misguided hipsters might consider crap. I will go out and pick up some Billy Strange now, because I’ve only got about 20 thousand records here, and that just ain’t enough.
I don’t usually consider myself a completist, but I do for guys like Buddy Merrill, who used to be the guitar player for Lawrence Welk, and Billy Strange and Al Caiola. I love listening to that stuff. The arrangements are killer. You can learn a lot.

Tell me about playing with Loretta Lynn.
Oh, we’re playing with her this Saturday. We play The 9:30 Club up in D.C. a lot; they’re good friends of ours. When they got the offer for Loretta Lynn, they just thought we should get Southern Culture on the bill. Mary can look a lot like a coalminer’s daughter. I’m sure she’ll bring the dresses and the wigs and look like her redheaded stepchild. That’s gonna be fun, man. I think those old-timers will dig us. They’ll know what surf music is, they’ll know the garage stuff. Just give ’em a double-barrel of everything we’ve got.

I love your “new” one, Zombified. Some of it’s been out before, but now it’s a full-sized LP, right?
The first seven or eight songs were out as an EP in Australia. But the last five are ones we’d done for a gore movie called Blood Feast 2 that we missed the deadline on. The guy had gallbladder trouble, got really sick and never got back in touch with us. So we stuck ’em on the back of this record. Hey, there’s so much good material for Halloween or zombie records, whatever you want to call ’em. For me, they work all year round. We got to mine our ’60s stuff, “Primitive” by the Groupies and “Torture” by John D. Loudermilk.

I did some Downliners Sect liner notes recently, and they cut an EP called The Sect Sing Sick Songs years ago that had a pretty nice version of “I Want My Baby Back,” with the guy digging up his girlfriend’s coffin and sliding in there with her.
Oh yeah, the guys who turned me on to the Downliners Sect were the Crawdaddys from San Diego. I used to live in San Diego, and I saw them all the time at the Zebra Club.

Oh, I thought you were from North Carolina.
I was kinda bi-coastal for a while. My dad lived in North Carolina, and my mom was in San Diego.

Well, you sound more San Diego than North Carolina to me.
I moved to California from North Carolina when I was 12. And I took so much shit for having a Southern accent, I lost it as quick as possible.

Hey, there’s nobody crueler about that stuff than junior-high kids. So, how did you meet the rest of the band, Mary and Dave?
The band started in 1983 with just me and my old roommate and a different bass player and drummer. We put out an EP called Hoodoo Beach Party, very Cramps-sounding. I didn’t sing back then. But, as we all got out of school, they all fell away. Mary was in a rockabilly band in Richmond called the Phantoms, and she’d heard that Leslie was leaving, and we always had a girl bass player. So, she hitchhiked with a bunch of hippies going down to see a Butthole Surfers show, just to try out for the band. Then our original drummer had to quit, so she said she knew a guy named Dave she used to play with at frat parties. He just got out of college, and he’s got nothing to do. Let’s call him. So we all moved into a house in the woods, just outside Chapel Hill. We started woodshedding, got our shit together, our schtick, and came out as we are now. The first record I did with Dave and Mary was Too Much Pork For Just One Fork, in 1991.

What’s kept you in it for so long? It can’t be getting rich.
I don’t know what to say. It’s just fun. And we can make enough money to survive on. I mean, none of us has had a day job since 1991. My motto has always been, “Less Is More.” We’ve always been pretty much DIY, for the first records anyway. With Geffen, we had to change it a little bit. Then we went back to doing it ourselves. I built a studio along the way, and I work with other bands in there.

Who did the great cover art for Zombified?
A guy named Sean Starwars, a pseudo-folk artist down in Louisiana.

I just did an interview with Dictators main man Andy Shernoff, and he just cut a great single called “Zombie Jew.”
Oh, I know Andy. He’s friends with the Fleshtones. And I’ve worked with the those guys a couple of times, Peter Zaremba and Keith Streng. I had dinner with Andy in Spain. And I didn’t know he’s quite a wine connoisseur. All I know about wine is what it does to me, kinda like rock ‘n’ roll.

I love the part of your website that has the recipes for deep-fried pickles and turtles made out of bacon with hot dogs for legs.
Meat turtles, very popular. I’ve eaten some of that stuff. My wife made a pig pie one time for a contest that Paula Dean had with Smithfield Ham. Instead of crust, she used ham steaks. Then she filled it with mashed potatoes, corn and cheese. And across the top was another layer of mashed potatoes with a lattice of bacon on top of that.

My god, that sounds like it might kill you on the spot.
Well, you know, I’m all for the immediate taste sensation. We ate two of ’em. They were really good.

Are you heavily into zombie movies?
I don’t really like the ones that just rely on gore. My favorite is a strange genre-bender called Invisible Invaders. Invisible aliens come to earth and tell us to destroy our nuclear weapons or the dead will rise to kill the living. The aliens have the power to inhabit cadavers. And the only thing that kills them is loud sound. If they did a remake, they could have Slash with Marshall stacks saving the world.