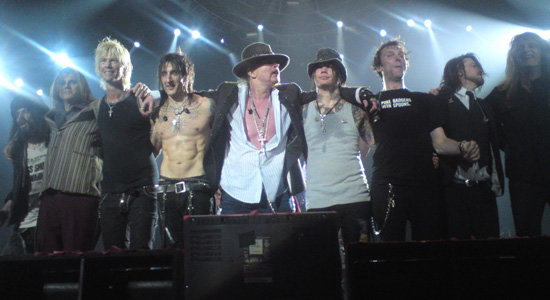 Stinson: It started off as the most punk-rock idea I’d heard in years: Axl owned the name Guns N’ Roses and was determined to continue on with all of us other dudes and weather the storm. I thought it was a good idea then, and I still think it is, in that he’s proven that he’s unflappable. What he decides to do, he’s going to do, no matter what.

One of the highlights of the whole experience is having written songs with a bunch of other guys I’d never worked with before to make Chinese Democracy. In the process, I realized two things. One is that Axl is fair to a fault when it comes to writing music. He wants everybody to have a part in every song, so everybody has a vested interest and every song will be the best it’s gonna be. And two, I learned how to write with other people and keep my ego out of the room. When you’re working with eight other people, that’s a necessity.

The touring aspect of it all is a whole other beast. Despite what anyone might think, it’s actually quite a bit of work putting on that large of a show. The travel is grueling and I miss my family. But at the end of the day, it’s a lot of fun to see all of the people out there go nuts for “Welcome To The Jungle.”