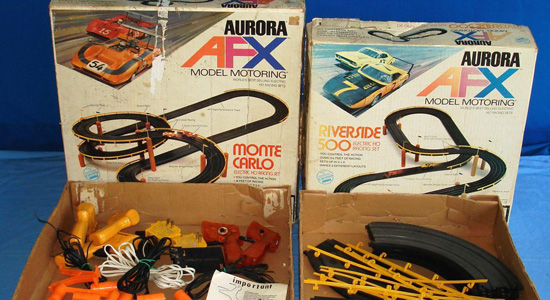 Stinson: I must have been 10 years old when my mom bought me my first AFX slot car set. At the time it seemed like the greatest gift ever. I found myself quickly saving my allowance so I could buy more cars to race my buddies and their slot cars.

The story goes a bit amok when I started having to steal the cars from the local Target store (which I think was the first ever Target) because I couldn’t afford to feed the monkey. We were pretty crafty at first—hiding under the womens’ apparel racks and taking the cars out of the packages so they couldn’t see us stealing them. What would the security guards say? We could just say we brought them in with us and they were our cars. What we didn’t know was that there were cameras everywhere.

As a result, by the age of 11, I had already been to jail and eventually they were threatening to take me away from my family and put me in a kids’ prison in Glenlake, Minn. Lucky (or unluckily?), my brother showed me how to play bass and the rest is history.

After narrowly escaping that crap, cut to me selling my race car set to my Aunt Nancy for my Uncle Ronnie’s Christmas present because he’d always wanted one. Then cut to my 30th birthday, when my mother purchased it back from Uncle Ronnie to give it back to me: all the cars, tracks, every last bit. I’m still trying to figure out where to set this up in my new house for my daughter to play with.