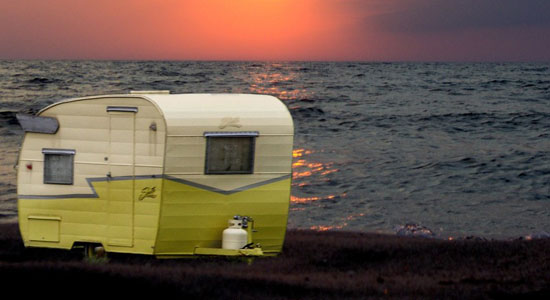 Stebbins: I collect old stuff. I love things from the ’50s and ’60s. My favorite thing that I own is my trailer. It’s a 1966 Shasta Compact, only 10 feet long! It’s tiny but has a bed/table and a full kitchen, even an oven! I love to bust out some trailer baked goods at a campout or rally. There’s something about baking in a trailer that cracks me up. So not roughing it! For me, its about decorating and socializing more than actually “camping.” It’s my own little house on wheels. Trailer folk are friendly! They’re known to enjoy a drink and a song around the campfire. I belong to a group of ladies who have old trailers called the Trailerettes.When you roll into a campground in a tiny old trailer, you instantly have a bunch of friends. You can’t help but smile when you see one!

One reply on “From The Desk Of Imperial Teen: Vintage Travel Trailers”

[…] Teen are guest editors of the day at Magnet Magazine. Check out the stories from Jone, Will, Roddy  & […]