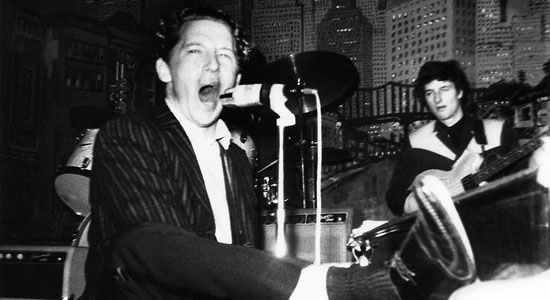 Prophet: Live At The Star Club is a Jerry Lee Lewis fan’s holy grail of rock ‘n’ roll. An amphetamine-fueled ride through the heart of the Reeperbahn with the Killer. A classic Euro-only record by a Southern loon who was known to say into the microphone to his audience, “I hope you all have heart attacks.”

I have no way to know whether Jerry Lee meant those words, but listening to this record it sure sounds like he’s determined to take the audience (and the band) all the way to cardiac arrest.

This is Jerry Lee Lewis at the Wigwam, bowing to Hank Williams in his seminary get-up. This is the bullet-holes-in-ceiling-for-grins, mid-’60s Holy Grail. A knockout punch on vinyl.

And I remember exactly where I was the first time I heard this record: It was a party in Stockholm. Green On Red played a sweaty show earlier at The Ritz, and by the wee hours of the morning, we were raising hell somewhere up on the umpteenth floor of an apartment building god-knows-where in the Swedish capital. I was going with a girl named Sissy, and she was pals with Nick from the Nomads. We were all hanging out and drinking a certain kind of white wine that people drink that time of year in that part of the world.

The party was raging. And music was blaring out of a distorted hi-fi. Nick pulled a record out of its sleeve, turned to me, smiled and said, “This has to be the greatest party album of all time.”

He put it on and cranked it up. The night popped open like a pomegranate. I was like, “That ain’t no album; it’s a fucking crime scene!”

I woke up the next morning hung over and determined to find my own copy of record. I eventually found a copy in France. I still have it.

One reply on “From The Desk Of Chuck Prophet: Jerry Lee Lewis’ “Live At The Star Club””

Out of the wilderness Killer exorcising bad ass demons and settling old scores.