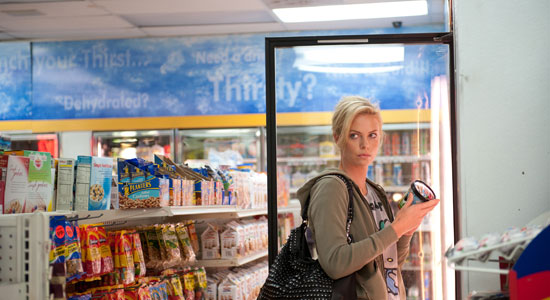 The much-anticipated Best Movies Of 2011 feature by MAGNET’s Eric T. Miller & Jud Cost is down to just Cost’s short list this year, due to Miller’s heavy daily involvement in the re-launching of MAGNET as a monthly print edition. Rather than as an hors d’oeuvre for the upcoming Academy Awards ceremony, we’re serving it, this year only, as an after-dinner mint and possibly the last word on what was very good about the movies of 2011. The logical successors to Gene Siskel and Roger Ebert will both return next year, armed with dog-eared notebooks full of scribblings on what was excellent and what was not. Check out Miller and Cost’s picks from last year.

Young Adult
In stark contrast to her successful career as the ghostwriter behind a fiction series for young adults called Waverly Prep, tall, blond and beautiful (if unkempt) Mavis Gary (Charlize Theron) is losing it: her mind (she drinks like a sailor on liberty) and her job, too (the book series has been canceled). Mavis, 37, concocts a harebrained scheme to change her life. With her text for the last book in the series overdue, she pulls up stakes, packs her tiny dog in her purse and leaves Minneapolis (“the mini-Apple”) for her hometown of Mercury, Minn. She’s determined to convince her high-school boyfriend, Buddy Slade (Patrick Wilson), to leave his wife and newborn baby and pick up where they left off in the first Clinton administration. Mavis slips a mix-tape into the cassette player of her car (accurately carbon-dating the machine as pre-millennium) and cranks up Teenage Fanclub’s bittersweet indie-rocker “The Concept” with its plaintive “I didn’t want to hurt you” refrain. If she’d only taken the lyrics to heart, she’d have called off this caper as a really bad idea. The unraveling of Mavis’ life, mostly in public, is almost (but not quite) too painful to watch, although she does make one unexpected friend during her week-long Mercury bender. Matt Freehauf (Patton Oswalt) is the guy who had the locker next to hers in high school, someone she never noticed. She meets him in a bar (of course) and he explains why he’s partially disabled now. He was beaten up by jocks who thought he was gay. Mavis, too, needs one of those blue and white handicapped-parking placards. She just doesn’t know it yet.

The Descendants
Like Theron in Young Adult, George Clooney gets the chance to really stretch out here. It’s when things aren’t going as planned, that both Theron and Clooney can dig into a role that goes against form. Unlike most of his recent work, where he looks sharp, gets the girl and is in complete control, this time around, Clooney as Hawaiian attorney Matt King, has a little bit of a paunch, wears ho-hum Hawaiian shirts, sports an un-Clooney like haircut and his wife Elizabeth is cheating on him. Except Matt doesn’t learn about that until she’s in the hospital in a coma after a water-skiing accident. To validate his standing as the “back-up parent,” he learns about her infidelity from his older daughter, Alex (Shailene Woodley), after he’s retrieved her from boarding school where she’s turning into a teenage drunk. Alex insists on bringing Sid (Nick Krause), her slacker boyfriend, back home, too. The dead-end scenes between Matt and Sid are some of the funniest generation-gap exchanges in recent memory. Along with Matt’s pre-teen younger daughter, Scottie (Amara Miller), the foursome is determined to track down one Brian Speer, the real-estate salesman who was hustling Mom/Mrs. King. And do something to him, what they’re not quite sure. Then there’s the impending really big land deal. Descended from one of Hawaii’s oldest clans, Matt is the main player in a transaction that could make everyone in his extended family fabulously wealthy by converting 2,500 acres of choice virgin land, entrusted to the family generations ago, into hotels and gambling casinos. Sounds like a no-brainer until moral complications creep into the picture like fog on the beach.

Margin Call
Featuring an ensemble cast reminiscent of the office-ful of backstabbing real estate salesmen in Glengarry Glen Ross, Margin Call tacks a few zeros onto their weekly incomes, dresses them in impeccable Wall Street attire and lets them destroy not just each other, but bring the entire world of high finance to its knees. Mimicking the day in 2008 when the employees of Lehman Brothers kicked the first boulders down the hill to create the subprime-mortgage meltdown, this office staff makes it perfectly clear that the “women and children first” rules no longer apply when disaster looms. Led by the brilliant Kevin Spacey (the link between Glengarry and Margin) in his Larry King suspenders as Sam Rogers, the entire staff of an unnamed investment firm are told to unload certain toxic assets to every customer they can reach in one day, before the company becomes the financial-house version of an underwater mortgage, with its net worth less than the money owed on the property. Division head Jared Cohen (Simon Baker) and chief risk officer Sarah Robertson (Demi Moore) are consulted about a computer program Eric Dale (Stanley Tucci) was working on before he was fired that predicts the entire disaster. Jeremy Irons as company CEO John Tuld, a man more interested in what’s for lunch than world financial stability, makes the final call to sell everything necessary, and the firm’s loyal customers be damned. Like the very best political thrillers (All The President’s Men, State Of Play), Margin Call has the ability to bring to life a seldom-read section of the newspaper, in this case the Business News, something normally relegated to lining the parrot’s cage.

The Ides Of March
The ominous date in the title, of course, refers to the day Julius Caesar was assassinated by a group of Roman senators after ignoring a warning to stay away from the Forum. Governor Mike Morris is in a bare-knuckled battle with Senator Ted Pullman in the Ohio primary to sew up the Democratic nomination for president. Morris (George Clooney at his most electable) looks like the perfect candidate: honest enough to admit he doesn’t go to church much, but smart enough to hire old pro Paul Zara (Philip Seymour Hoffman) as his campaign manager. And lucky enough to have dedicated neophyte Stephen Morris (Ryan Gosling) as Zara’s number two man. Since this is the Democratic Party, there must be a fertile young girl lurking in the wings. That would be Mollie Stearns (Evan Rachel Wood), a former senator’s daughter getting more than her feet wet in national politics for the first time. Wood takes the place here of Marisa Tomei, who would have played Mollie 25 years ago, but is now tabbed as Ida Horowicz, a New York Times reporter in horn-rimmed glasses, hot on the campaign trail. When Pullman’s manager Tom Duffy (an oily Paul Giamatti) asks to meet with Morris at a quiet little bar to tempt him to join the opposition, the consequences are immediate. As one character says to another after a major leadership shakeup, “Someday you can tell me what you had on the governor.” The other responds, “Or what I had on you.” One reason Clooney may have made this movie is to permanently remove himself from any future presidential consideration. Mission accomplished (even if he decided to start attending church more often).

Super 8
A loving throwback to the innocent days of those Walt Disney-produced, made-for-TV movie serials like The Hardy Boys and Spin And Marty, Super 8, set in 1979, catches its stars at just the right time of adolescent development. Charles Kaznyk (Riley Griffiths) is the pudgy brains of the group with big plans to make a homemade zombie movie from his own script, shot (without permission) on a Super 8 camera owned by the dad of his best friend, Joe Lamb (Joel Courtney). After-class negotiations with Alice Dainard (Elle Fanning), a girl that both Joe and Charles have their eye on, procure her dad’s car with Alice at the wheel to ferry Charles, Joe and three other crew members down to a deserted train depot late at night. The atmosphere of Charles’ project is ratcheted up several notches by the unexpected arrival of a freight train, highballing it this way. Before the train arrives, a pickup truck pulls onto the tracks, causing a disastrous derailment, all caught on film by this peach-fuzzed movie crew. Before the cops and fire engines (and, surprisingly, the U.S. Army) arrive, the kids, none of whom is injured, talk to the driver of the pickup, who turns out to be their high-school biology teacher, Dr. Woodward. Brandishing a weapon, Woodward warns them they must tell no one of this episode. To top off an unforgettable evening, none of the kids is absolutely certain, but there’s a strong possibility that something being held captive in a heavily locked boxcar escaped into the woods right after the train went off the tracks. Charles’ zombie film may be about to get another lucky break.