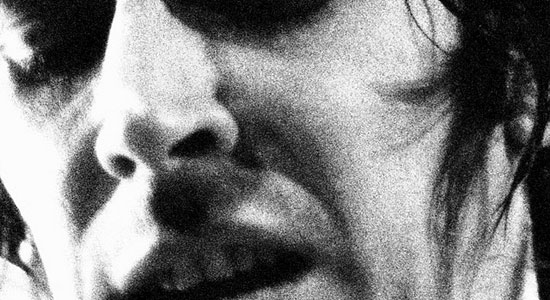 On April 24, 1977, during his twisted rendition of “Heartbreak Hotel” in Croydon, England, John Cale brandished a meat cleaver in one hand and a chicken in the other (which, unbeknownst to those attending, was already dead). As the punk kids in attendance moshed and slammed at the foot of the stage, Cale placed the chicken on the floor, knelt down and swiftly hacked off its head. As he whipped the severed remnants into the audience, everyone, including the other band members, stared in bemusement. The vegetarian rhythm section of Mike Visceglia and Joe Stefko, who backstage had interrogated Cale on his plans for the bird, promptly walked off. With only half a band and an audiencedumbfounded, the show was over. Cale later wrote, “It was the most effective show-stopper I ever came up with.” 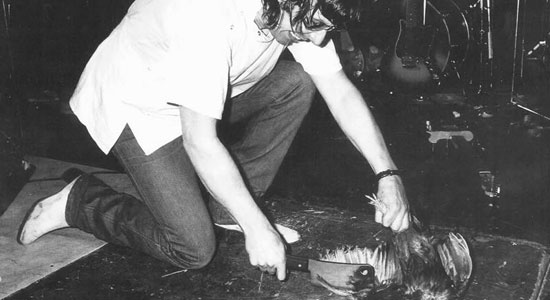 Even before co-founding the Velvet Underground with Lou Reed, Cale had been confrontational with his audience, though usually without beheadings. A classically trained pianist and violist, the Wales-born Cale had always flirted with new sounds and musical ideas. His avant-garde tendencies only grew stronger after moving to New York City in the early ‘60s, as he began utilizing composer La Monte Young’s minimalist drone techniques, holding sustained notes for inordinate amounts of time. He brought these influences to the Velvet Underground, whose wild ambience and deafening noise made them one of the most innovative bands in rock ‘n’ roll history. After leaving the group over creative disputes (he wanted to push their experimental sound even further), Cale launched a solo career that bounced between orchestral works, folky pop and abrasive punk, while producing other combative artists such as the Stooges and Patti Smith.

Throughout the years, Cale struggled with depression and drug use. By the time the “chicken incident” occurred, he was in the midst of a heavy cocaine addiction, which plagued him with paranoia and borderline psychosis. As his decisions became more irrational, his music increasingly grew angrier. In response to his band members’ departure, Cale quickly recorded the three-song Animal Justice EP, featuring “Chickenshit,” a sarcastic retelling of the events. Although the song is a manic mess, as is his noisy cover of Chuck Berry’s “Memphis,” the EP closes with strikingly beautiful ballad “Hedda Gabler.” Loosely based on the Henrik Ibsen play of the same name, the song features Cale’s voice in fine form, and the slow meditation is a welcome resolution to the previous madness—a technique he would use again on his next album, Sabotage/Live.

Cale spent the better part of ’78 producing and performing with various artists, as well as founding his own label, Spy Records. Distributed by his former label, I.R.S., Spy had a very short life span, though it released some great music, including a single by legendary rock critic Lester Bangs and an EP by the unfortunately obscure Model Citizens. Cale performed only a handful of shows that December at New York’s legendary punk haven CBGB, with his stage getups now involving hockey and surgical masks, medical scrubs and hard hats. (A few recordings from the ’78 shows make up Even Cowgirls Get The Blues, a hard to find semi-bootleg released in 1987.)

The music scene was changing rapidly, but the world climate was changing as well. Cale’s next batch of songs would seemingly draw a comparison between the two; as many punks used their music and performances to display their sometimes violent, misplaced attitudes, America nervously watched the U.S.S.R. in the throes of the nuclear arms race, with the height of the Cold War right around the corner. Recorded over four nights in April ’79 at CBGB, Sabotage/Live dealt with these threats head on. In Cale’s autobiography, What’s Welsh For Zen?, he explains, “Sabotage was a response to the militarism that was in the air around then. When I released the controversial track ‘Ready For War’ as a single, I should have said to the audience, ‘We have an induction room backstage. Let’s see you come back and enlist. You wouldn’t have seen one of them—people who had just been stamping their feet and yelling, ‘Yeah, right on!’ Though of course if you stole a hubcap off one of them, you’d probably hear from him.”

On opening track “Mercenaries (Ready For War),” Cale intones, “Mercenaries are useless, disunited, unfaithful/They have nothing more to keep them in a battle other than a meager wage, which is just about enough to make them wanna kill for you, but never enough to make them wanna die for you.” Lead guitarist Mark Aaron zips around the scales, slashing and burning his way through Cale’s attack on soldier-for-hire and all those who wish to be. All throughout, he tears his voice by screaming that he’s “ready for war,” warning that we “better be.” With the fury and feedback reminiscent of White Light/White Heat-era Velvets, it’s one of the man’s most freighting moments, and a hell of a way to start the show.

Militarism and paranoia run rampant throughout out the live record, even on the cover, which features a stark black and white photo of Cale in his hardhat and glasses, with a mushroom cloud hanging behind. In an interview soon after the record’s release, Cale said, “This album is about going through that nuclear barrier, I think that’s important. You’ve got to experience a nuclear war and find out exactly what it does, how people live in the face of it after the fact of it.” If there’s anything that could make the listeners feel the paranoia that Cale was experiencing at the time, it’s the oncoming threat of nuclear war. For those who lived during the atomic age of the ‘50s (and to some extent in the ‘80s), your happiness could be spoiled at any moment, worrying that the end of the world could come and there was nothing you could do. Constantly being bombarded with ominous news reports or stricken with fallout shelter envy, the anxiety could warp any pleasure you might have; Cale’s rendition of “Walkin’The Dog” seems to sonically reproduce this feeling. By taking Rufus Thomas’ goofy novelty hit and scraping it like steel wool, the unrecognizable post-punk version seems to warn that no joy is safe from harm’s reach.

On “Dr. Mudd,” the fear reaches its high point, though it might not sound like it. Over jittery rhythm guitar, female singer Deerfrance adds carefree “doo-doo-doo” backup vocals, although the lyrics are anything but. With the repeated cries of “Whatcha gonna do?” Cale strains his voice describing the atomic bombings of Hiroshima and Nagasaki. He reminds us that although America may not be forced to relive the events every day, the people of Japan are frequently burdened, cursed to “remember when the children’s hair fell out, and all their skin turned blue.” Cale then asks us to put ourselves in their shoes, quizzing our elected officials what will happen when “China drops a bomb on you.” It’s a catchy new-wave masterpiece, though no fun for those that listen close.

Echoing Animal Justice, the final track on Sabotage/Live is a release from the suffering that comes before; unfortunately, it comes in the form of a funeral dirge. “Chorale” is a tremendous song, featuring droning keyboards and elegant vocal harmonies. As the album draws to a close, Doug Bowne’s marching snare highlights the powerful words that lay the listener to rest: “And the cold of the living, and the cold of the dead, hand in hand from the beginning to the end.”

No matter how dreary the subject matter, these two records would hold some of Cale’s most worthwhile work of his career. Animal Justice is an entertaining look back at his most infamous moment (though he probably shouldn’t have decapitated that chicken). The superior, and still relevant Sabotage/Live is a much deeper live album than most, imploring its audience to ponder many philosophical and political ideals; perhaps Cale’s drug use had made him delusional, though maybe he still had a point. No matter one’s beliefs, Cale viewed the record with pride, later proclaiming, “It looks like finally I have made an American album.” It would be hard to argue.

A great album which has been vastly overlooked. I brought a copy back in 1980, and it blew me away. The opening track is a total classic. It is a shame that it has been deleted for many years but if you can find a copy, buy it immediately.

You won’t be sorry.