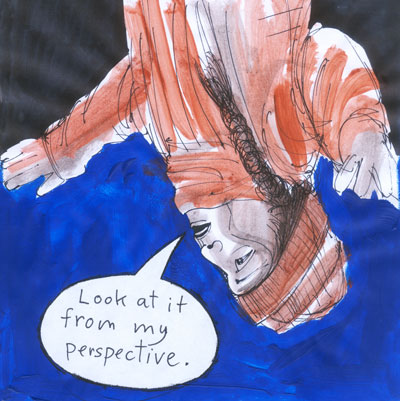 In their mid-20s, the four painters weren’t exactly young, but at their age it was something of a novelty that they’d left their parents’ homes. The New York Times used the terms post-adolescence and pre-adult to describe their generation’s tendency to stave off responsibility by staying at home well into their 20s, allowing parents to take care of them, prolonging their childhoods or as some asserted, denying them the opportunity to have rewarding lives as adults. Worse, the phenomenon seemed propelled by parental guilt.

They knew they were going to be painters—that or pirates, as Jeff liked to joke—and besides, they could always move back home if they wanted to. They shared one full-time position at Opus, lived frugally and sold the odd painting. Taking on the extra rent of the studio was a risk, but $1,000 divided four ways was an awesome deal. The room was small, but the high ceilings made it less boxy. Thirty by 40 divided into four spaces provided each painter with enough room to take three steps back from his easel to assess how things were progressing.

Once they’d settled into routines at the small space on Railway Street, they realized that noise was the biggest problem. Not external noise, but the noise they made themselves. None of them were being noisy, per se. It was the relentless accumulation of sounds: paintbrushes swishing in jars of water, panels being set on the cement floor, a dropped tube of paint smacking the floor.

If Mark had his way, the radio would stay on CBC as it rolled through intellectually stimulating Canadian content, but Bruce wanted free jazz that was too abrasive for Adam’s need for a much smoother ambiance. Jeff, the least fussed about specific genres, solved the problem by finding a radio station that none of them liked, thus developing an absorbent backdrop for daily life. It distracted them from what they all needed and couldn’t have. Peace and quiet. Once they found the sweet spot, the volume never changed. The painters adapted well enough to the self-violation of their individual tastes in the name of group sanity. Indonesian gamelan music streamed 24/7 and somehow it worked. In fact, it was the rocket-fuel they needed. Until then, none of them had realized how much sound impacted their ability to maintain creativity.