Last summer, rock ‘n’ roll six-piece Dr. Dog made a return to its Philadelphia home studio to record its seventh album, Be The Void (Anti-). In MAGNET #85 (order a copy here), we talked to the group’s founding members, co-songwriters and vocalists Scott McMicken (guitar) and Toby Leaman (bass), about that journey, and what it takes to bring a band with a formidable label deal and a professional touring setup back to its DIY roots. One thing that has remained consistent in Dr. Dog’s music across its evolving career is a juxtaposition of existential, occasionally desperate lyrical concerns with exuberant pop songs. Dr. Dog keyboardist Zach Miller will be guest editing magnetmagazine.com all week. Read our new Q&A with McMicken and Leaman. 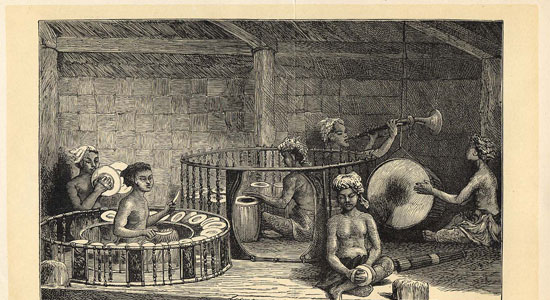 Miller: One of my favorite places to find music over the past year, this page (and the man behind it) is an incredible resource for the musics of a bygone world. Jonathan Ward is a 78 collector who got interested in recordings from around the world and started posting them online with some very brief but scholarly commentary on each side. For me, it has really opened my ears to new music, or at least new ways of hearing music. A number of songs that took a lot of listens for me to really appreciate. Maybe it’s something to do with the allure of history and nostalgia; a lot of these recordings are among the first documentations of this music and, in many cases, a very pure expression not directly influenced by recordings or knowledge of music of other cultures. But mostly I was just wondering what does Indonesian music sound like? Cambodian? Zulu? Bolivian? Seneca? He also has a compilation called Excavated Shellac: Strings, which is excellent, and Opika Pende, a boxed set of pan-African music, which I don’t own yet but can’t wait to.