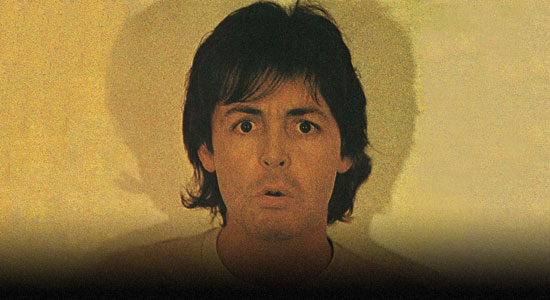 Part one in our two-part look at Paul McCartney’s 1980 solo album, McCartney II. Come back next Thursday for part two.

The old stereotype of the Beatles goes something like this: John was the “smart one,” Paul was the “cute one,” George was the “quiet one,” and Ringo was the “funny one.” Though all of these are true, you could easily swap the adjectives around, pin them on any of the four and they would still make as much sense. The Beatles were the Beatles; they were too amazing to tie down that easily. Many view John Lennon as the most experimental of the four, bringing the pathos and avant-garde tendencies that helped pen “Tomorrow Never Knows” and “Revolution 9,” but all four were pretty out there. George Harrison broke new ground by adding Indian instruments and structures to the group, as well as fiddling with new technologies on his 1969 solo album, Electronic Sound. Ringo Starr added his permanent love of country ‘n’ western music, reflected on “Don’t Pass Me By,” their cover of “Act Naturally” and exclusively on his 1970 solo album, Beaucoups Of Blues.

Over the years, Paul McCartney has been seen as the sensitive balladeer and the most light-hearted of the bunch. (This was hilariously parodied in Jack Black’s over-the-top portrayal in Walk Hard: The Dewey Cox Story, where he complains to Lennon, “I’m sick of you being so dark, when I’m so impish and whimsical!”) And while this Paul appears on “I’ll Follow The Sun” and “Honey Pie,” this is the same man who also wrote the unhinged, proto-metal “Helter Skelter,” and the game changing concept behind Sgt. Pepper. (He was also behind musique concrète freak-out “Carnival Of Light,” a legendary, still-unreleased Beatles tune from ’67.) Even now, as a grandpa with a new album of jazz standards, he still occasionally shows off his experimental side, like the crazed Oobu Joobu radio shows or his electronic work as the Firemen.

It’s this side of Paul that makes up much of McCartney II. Originally intended as a goofy mess around for personal use, Macca recorded a bunch of songs in his Scottish farmhouse during summer 1979, before returning to the U.K. that winter to tour with Wings. Upon the band’s arrival in Tokyo for a planned tour of Japan, McCartney was busted at customs for attempting to smuggle almost half a pound of high-grade marijuana, which landed him jail for nine days and forced Wings to cancel their upcoming performances. The cancellations, combined with his boredom with the band, led to Paul putting Wings on hold. With the band’s future in limbo, he decided to release his home recordings in 1980.

With the sequel to one-man-band solo debut McCartney, Paul is once again single-handedly running the show. Armed only with a 16-track recorder sans mixing board, two microphones and the acoustics of his house (including the bathroom and kitchen), McCartney II was the opposite of the recent overblown Wings output, especially 1979’s Back To The Egg. Unlike that album’s bombastic “Rockestra” all-star band, featuring more than a dozen famous musicians on a barrage of tracks, this was as pure McCartney as you could get; he played all the instruments, did all the vocals (except for two appearances by wife, Linda), engineered everything right in his house and for the first time in a few years, sounded like he was truly having fun again. Interested by the recent wave of synthesizers, drum machines, sequencers and other new gadgets, Paul recorded these songs as an experiment with fresh sounds for his own enjoyment. And for an artist of his stature to release an album of goofy bedroom tunes, warts and all, is incredibly commendable.

The record opens with “Coming Up,” a jittery funk song, full of cartoonish vocals and dizzy synth lines. Though it still features his patented “impish and whimsical” songwriting, the track sounds reminiscent of the rhythmic heavy new wave that was “coming up” (ha!) at the time, along with the bedroom pop of lo-fi hero R. Stevie Moore. Released as the album’s first single in April 1980 (with a live version with Wings from the previous year as the b-side), the song’s video features Paul in a similarly goofy mood, as he portrays members of the Plastic Macs, his “band” on the song. Besides playing the role of his early mop-topped self, McCartney also pokes fun at some idols and peers by taking on their roles, including Shadows guitarist Hank Marvin, Neil Young, John Bonham and Sparks keyboardist Ron Mael. Also noteworthy about the song was its influence on Lennon; after hearing the song for the first time in his car, the catchy tune was stuck in Lennon’s head all day, eventually complaining that it was “driving [him] crackers!” Although not the only reason, the song inspired Lennon to come out of retirement and begin work on what would become Double Fantasy.

Even though it follows in the wacky footsteps of “Coming Up,” which was positively viewed by critics, “Temporary Secretary” showed the flip side to its public adoration. Driven by a bleeping synthesizer sequence, the singsong-y lyrics detail a plea to “Mr. Marks” of Britain’s Alfred Marks temp agency, to send a “temporary secretary,” though it seems that Paul has more than typing on his mind. Over acoustic guitar and pulsating drumbeats, the narrator admits, with some inane lines, that his new worker “can be a belly dancer, I don’t need a true romancer” or “she can be a neurosurgeon, if she’s doing nothing urgent.” Admittedly inspired by Ian Dury And The Blockheads, the song is a bit of a mind-fuck on first listen, even now. It’s not often you hear a giant artist release a song that’s as ridiculous as this one, and it’s not much of a surprise that the critics scorned it at the time of release. But once you get over the fact that this is Paul McCartney by way of Devo, you begin to love it for all its inherent craziness. It draws you in with confusion, but eventually you realize it’s as catchy of a song that the man has ever written. (Years later, the song gained a new life as an underground dance club hit.) Is it stupid? Oh my god, yes; very much so. But does that make it any less of a great song? Not in the least.

There are a few instrumentals on the album, which are sometimes its highlights. “Frozen Jap,” which was ironically recorded and named before his drug bust, features an Eastern-flavored synth melody and dance-y rhythms that would appease Kraftwerk fans. More than a light throwaway, “Frozen Jap” sticks with you long after it’s finished and becomes one of the record’s best. In the same vain, “Front Parlour,” named for the room it was recorded, mixes the stuttering drum machines with otherworldly keyboard swirls, under waves of echo and reverb. To balance out the wackiness, there are a few subtle ballads included. “One Of These Days” is seemingly a call to himself, a reminder to put his “feet on the ground.” Likewise, single “Waterfalls” features a similar message: not to go looking for trouble when it’s unnecessary. (Maybe Paul should have taken his advice before trying to bring pot in Japan, although at the time, it might have been viewed as very necessary.) The song also received another life, years later, as it inspired TLC’s 1995 megahit of the same name, even utilizing a few of the same lyrics.

Although the album received mixed reviews, it still became a top-seller. It’s not a flawless record by any means, but McCartney II was one of the most interesting works of the man’s career. Unfortunately, the album wasn’t the beginning of a new experimental career phase like it could have been, as Paul was soon back to his usual ways with follow-up, Tug Of War, featuring sugary hit “Ebony And Ivory,” his famous duet with Stevie Wonder. Luckily for us, there’s plenty more material from those ’79 sessions that weren’t used on the album or hidden away as b-sides, some of which are as good, if not better, than the material that was picked.

Check back next Thursday for part two, where we’ll look at the outtakes, b-sides and other previously unreleased highlights from 2011’s McCartney II three-CD reissue.