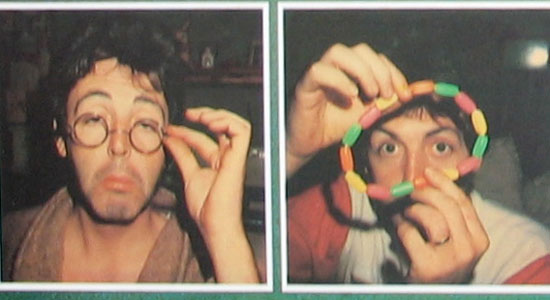 Part two in our two-part look at Paul McCartney’s 1980 solo album, McCartney II. If you missed part one, you can read it here.

When I first heard about McCartney II’s 2011 reissue, featuring several editions including a three-CD/one-DVD “deluxe” boxed set, I remember thinking, “Who is this for?” The first release in the Paul McCartney Archive Collection was Band On The Run, and along with the extravagant “deluxe” boxed sets of McCartney, plus the upcoming Ram, these all make sense; all three albums are the most popular and acclaimed works in Paul’s solo career. But is anybody really going to shell out upward of $75 because they love “Temporary Secretary” that much? (I mean, I would, but still … ) McCartney II was a goofy one-man band experiment, and its whimsical weirdness received mixed reviews upon release, soon relegating it to cult status.

So why now? For one, since 1970’s McCartney was reissued, it makes some sense to re-release its 1980 sequel, too. Plus, the high-priced boxed sets were released right before 2011’s holiday season, when people blow money on gifts for people they like and/or don’t know what to get. However, while McCartney features the mega-hit “Maybe I’m Amazed,” as well as fan favorites like “Junk” and “Every Night,” McCartney II features quirky computer music made by a really stoned man in his bathroom. For those who haven’t heard McCartney II, receiving it as a gift would be similar to getting Lee Carvallo’s Putting Challenge when you really wanted Bonestorm. Even though Lee Carvallo’s Putting Challenge (McCartney II in this metaphor) is arguably the better game (album), if you had your heart set on Bonestorm, it’s going to be a shock.

Perhaps McCartney thought the album should be given another look, while simultaneously pleasing the diehard fans who craved more from the 1979 home-recording sessions. Fortunately, there was a whole bunch of great songs that didn’t make the final cut, as at one point, it was originally going to be released as a double record. Just like bulk of the album, the b-sides and outtakes really lean on the new wave of synthesizer sounds.

“Bogey Wobble” is similar to the regular album’s “Bogey Music,” in that they were both planned to be on the soundtrack to a film adaptation of Raymond Briggs’ children’s book Fungus The Bogeyman. The movie was never made, but the songs live on, as do the Pac-Man sounds of “Bogey Wobble.” Following the futuristic music trend, “Secret Friend,” the b-side to “Temporary Secretary” is a long psychedelic-electro jam that rolls along a loopy sequencer, which doesn’t sound too far off from the techno of the early- and mid-‘90s.

The very first song that Paul worked on in these sessions was “Check My Machine,” and it was intended to do just that: try out his new equipment. Featuring cartoon clips, a dub-like bass line and repetitive vocals, the song is a testament to the man’s pop brilliance that he can make a catchy tune so easily. “Check My Machine” was originally the b-side to the “Waterfalls” single and a bonus track on the original CD reissues. The 2011 “deluxe” box features that version and the more than nine-minute original.

“All You Horse Riders” was first released in 1986 for a documentary about wife Linda’s horses entitled Blankit’s First Show. It features a woodpecker-like cowbell pattern while Paul ad-libs instructions on how to properly ride your equine. For folks who think “Temporary Secretary” was too stupid, “All You Horse Riders” will probably give them the same feeling, but for those who dig Macca’s odd side, it’s a bit of fun nonsense. Segueing right from “Horse Riders”is the moody “Blue Sway,” another synth-heavy track that features some bluesy guitar licks from Paul. The second disc of the “special” edition and “deluxe” boxed set also features a more structured version of “Blue Sway,” including orchestral backing.

Without a doubt the most famous song to come out of the McCartney II sessions is “Wonderful Christmastime,” the bouncy classic that’s still heard ad nauseam around the holiday season. Though there’s a very good chance you’re sick of it now, you know it’s a great song, and you enjoyed the hell out of it when you were a kid. It doesn’t have the political ideology of John Lennon’s “Happy Xmas (War Is Over),” nor is it meant too, but it’s nonetheless a classic. In a way, “Wonderful Christmastime” completely fits the “impish and whimsical” Paul McCartney stereotype: an inoffensive, fun pop song by a man who’s a master of them.

Although it’s an odd choice for an expensive boxed set, the McCartney II reissue features a lot of fantastic material from a peculiar period in Paul’s career. Though it’s missing the album’s introspective ballads, it has plenty of the off-kilter disco tunes that made the LP a cult classic, some of which are even better than the ones on the actual record. (Of course, if it’s worth the money is all up to you.) Luckily, the “special” two-CD edition features all the best bonus tracks, so unless you want the short DVD or the third disc of slightly longer versions, this should do.

I shelled out the money for the McCartney II Deluxe and have no regrets. I like Weird Macca. In fact, I prefer him. And there is so much good stuff on all 3 CDs of this set. My favorites: Check My Machine, Secret Friend, Blue Sway, Temporary Secretary. There are a bunch of wild tracks here and some gorgeous ballads, too, like One of These Days. I love All You Horse Riders. It’s hilarious and I’ve always thought it should have been a big hit a gay cowboy nightclub. 🙂