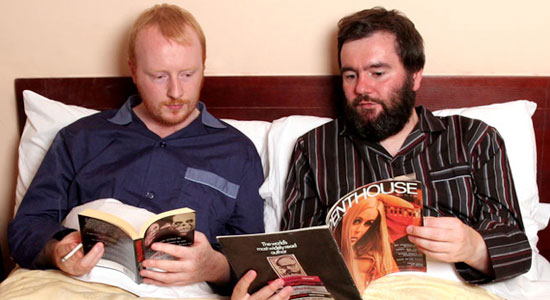 Graham: I grew up listening to Arab Strap and Mogwai. Without those bands I wouldn’t be in a band or be writing music. We’re lucky enough to be friends with both bands now and toured three times with Mogwai. Aidan and Malcolm have produced amazing solo albums as well. Aidan’s last album with was called Everything’s Getting Older and was a collaboration with a guy called Bill Wells. It was a bit of a masterpiece. Malcolm has a new Project called Human Don’t Be Angry, and I’ve been lucky enough to hear the self-titled album, and it’s also amazing. Errors are a band on their third record now, and it’s called Have Some Faith In Magic. Everybody should own this album! RM Hubbert is a solo artist on Chemikal Underground Records, and his recent album was produced by Alex Kapranos from Franz Ferdinand. It’s one of my favourite records this year. Mogwai’s own record label, Rock Action, release some of my favourite records, and last year a band called Remember Remember released an album called The Quickening which everyone should check out. Andy recently did a remix for Remember Remember which is coming out on their remix album.