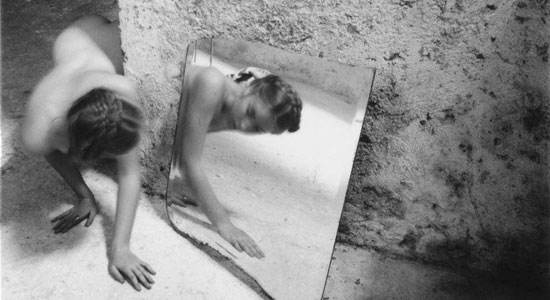 Manson: With so few alternative female artists in music to be inspired by over the last few years, I’ve become increasingly obsessed with visual artists instead. In particular, with women like Louise Bourgeois, Frida Kahlo, Tracey Emin, Maya Deren and Marlene Dumas.

I was lucky enough to discover Francesca Woodman‘s photography by complete accident during a visit to the Scottish National Gallery of Modern Art a few years ago to see Tracey Emin’s first major retrospective in the U.K., which was being held in my home city of Edinburgh. It was such an incredible exhibition and one that spurred me to write my first-ever fan letter to a public figure … But that’s another story entirely.

On my way out of the Emin exhibition, I was giddy with fan-girl enthusiasm and so had the curiosity and energy to take a peek at some of the other art on display in adjacent rooms. It was there I came across a small room of Francesca Woodman’s small, stark pictures. I had no idea at the time that she had committed suicide at the age of 22, but something about her work really took a grip of me. She’s not as well known as some of her contemporaries, which is why I am mentioning her here. If I had my way I’d rattle on about how obsessed I am with Tracey Emin, too, but like I said, that’s another story for another time.

One reply on “From The Desk Of Garbage’s Shirley Manson: Francesca Woodman”

Thanks for finally talking about >From The Desk Of
Garbage