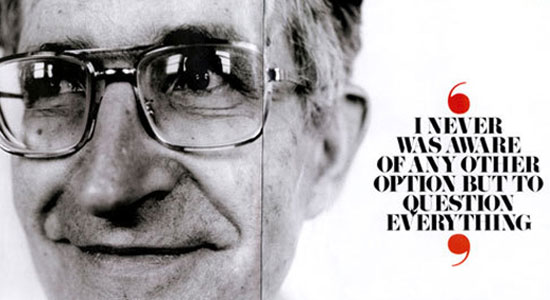 DeBoer: Noam Chomsky is arguably the smartest person in the world. He is a professor of linguistics and philosophy at MIT and has been for 50 years. He has written more than 100 book, but Manufacturing Consent: The Political Economy Of The Mass Media is probably the one that gets the most attention. It is a great read. Sadly, in his native USA, he is basically ignored because of his logic and an irritating tendency to acknowledge painful facts. If you are a person who dares to watch the “news” on TV or likes to read the newspaper, it is important to understand what the job of mass media is. Their job is to basically shape your worldview. Reading Chomsky shatters this view in the most beautiful (and dangerous) way. After reading Chomsky or listening to his speeches, you will experience the media quite differently than you did before. Most people sit around the bar repeating whatever they are told on TV as if the news actually paints a factual picture of the world around them. Most of the time, it does not. Noam gets you to ask yourself things like this: What if some country initiated an undeclared and illegal war against Canada, and within weeks, also started a war with Mexico, forcing regime change in both countries while killing hundreds of thousands of people and taking many of their citizens away to secret camps of torture without due process? At the same time this country tells the U.S. to discontinue their missile testing and disarm all their nukes or they will be next. What if the U.S. sat around doing nothing to help the poor people of Mexico and Canada for more than a decade? Shame on them, right? Well have a look at Iran’s neighbors and have a think about it. We are sold wars for our tax dollars by the media. After watching TV or reading the paper, we might say, “Hey these countries the United States is bombing are full of bad people. They treat women badly. They have evil leaders. They have evil religions.” It is way more complicated than that. The ideas and talking points you get from Noam Chomsky are not important enough to be mentioned by mass media because … hey, isn’t American Idol on tonight? Chomsky’s How The World Works is a great book to get you started.

One reply on “From The Desk Of The Dandy Warhols’ Brent DeBoer: Noam Chomsky”

Brent: I love intellectual musicians, many are, as you know. Yes, Chomsky is great. Love his quote about questioning everything — that’s what I learned with my expensive, mostly paid for by my own labor, higher education — critical thinking. Despite nurturing my critical mind, my family thinks I am a nut job. Maybe I am, but I want the truth. Yes, your points about oversimplification of complex issues (foreign policy, which usually means getting at resources) is right on base. I see younger folks starting to wake up and seek real answers, but the spin machine is so funded and widespread. We must “fight the good fight” and connect, protest in non-violent ways. democracynow.org, linktv.org, and other independent media are essential to access to info. and truth. Well, that’s all for now. Rock on.