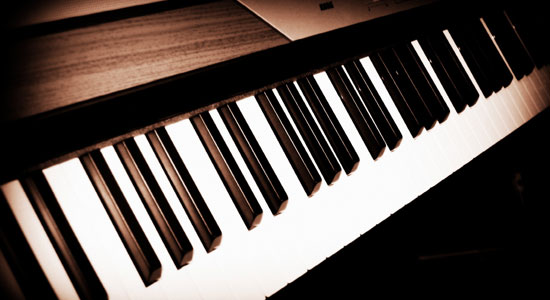 McCabe: With all the information out about the history of the Moog these days I started to get curious about the other main keyboard I play, the Korg MS20, and its origins. Here’s what I found: In the early ’60s, these two guys in Japan, Tsutomu Katoh, a nightclub owner, and Tadashi Osanai, a noted accordionist who plays at Katoh’s club often, with a Wurlitzter Sideman rhythm machine team up to make a better rhythm machine. In 1963, their first product was the Donca matic DA-20. Named after the sound the machine made when you used it: donca, donca, donca … Not long after, an engineer wanting to build keyboards joined the team, and they soon had what they named the Korg, which was the first letters of their names plus the RG in organ (hmmm, clever). This got them through the ’60s with great success, but once the ’70s hit and the niche market of synthesizers started to take off they needed to think of something to keep up, hence came the miniKorg. Shortly after, the keyboard I know and love was released in 1978 and produced until 1983. What’s special about these keyboards is that they not only have all the fun knobs, but there is an entire patchable section for deeper control and sometimes a lot more confusion, but hey. They also make the coolest bass sounds of any keyboard ever as far as I’m concerned. Wondering who built the circuitry for Korg? I’d never thought to wonder, but the answer is Yamaha, who even had controlling stock of Korg for five very successful years, basically the entire time I was in high school plus eighth grade. Then Katoh bought back most of his share and regained control. Over the years, Korg has been credited with several innovations and landmark products, even making the bestselling synth ever, the M1 workstaton, in 1988. Later, in ’92, Korg acquired Vox and was the exclusive distributer of Marshall amps until 2010. I have to say I’m impressed with the consistent success of this company, and I’m pretty darn proud to be part of the Korg MS20 revival. Katoh only recently passed away, March 15, 2011, after a long fight with cancer, so I’d like to think he enjoyed watching old synths get popular again.

One reply on “From The Desk Of The Dandy Warhols’ Zia McCabe: Korg Keyboards”

I have some Korg keyboards in the studio and they’re all my reliable pieces. It’s nice to know that I have made the right decision on going for Korg.