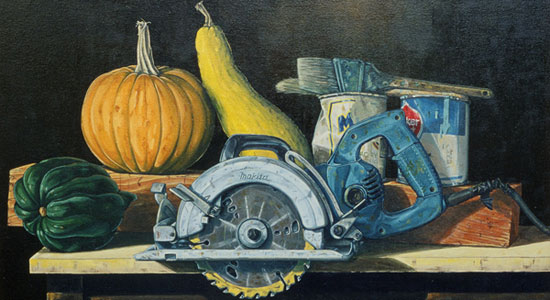 Holmström: I stumbled across Hickory‘s artwork when I went and saw a friend’s band play at a local cafe. There were a series of still lifes that were painted with a surrealistic exactness that blew me away. Every single one of them would have made the coolest album cover, wide open for all sorts of interpretation; I’m sure the fact that they were all square helped. When we started negotiating for him to paint our album cover I found out that he works from life, not photos, and it takes weeks to finish. After seeing all the digital, photoshopped images, an oil painting can be very refreshing. Along those same lines is Walton Ford, who has the most out-there take on Audubon I’ve ever seen.

One reply on “From The Desk Of The Dandy Warhols’ Peter Holmström: Hickory Mertsching”

I agree! I think I told him my first impression was Mark Ryden meets Audobon…would love to see an LA exhibit Hickory!