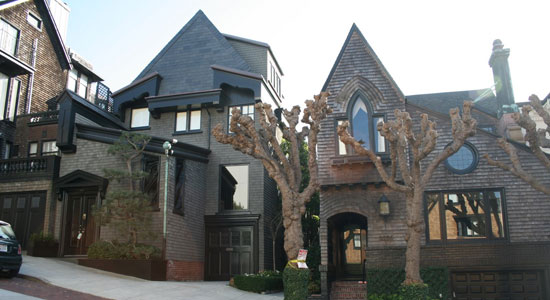 Taylor-Taylor: Bernard Maybeck. Godfather of architecture known as “Bohemian Revivalist.” I own a house that is an imitation of his medieval style, which became a West Coast trend in the early part of the 20th century. This I believe began when he designed and built a Tudor Castle for the wife of William Randolph Hearst. This was in the Berkeley Hills and was the scene for the Cary Grants and Ernest Hemingways of the world to hunt, fish and party together. I’m making a leap of faith when I say that this is what led to the great number of mock-Tudor medieval homes of the Hollywood Hills that were built in the 1920s. I’m also making an assumption that the guy who built my house in 1926 came from Hollywood. Why he thought Portland was a good idea was a mistake only compounded two years later by the great depression. A great majority of Maybeck’s buildings were destroyed in a massive forest fire in the Berkeley Hills. This style of home has now become known as “Storybook.”