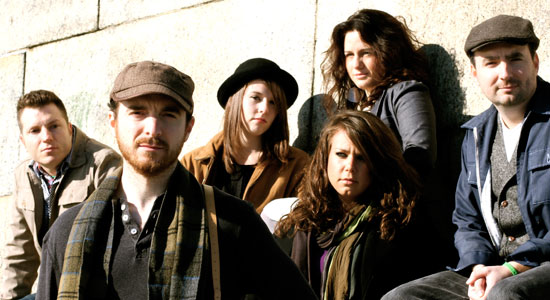 Here at MAGNET, we are often guilty of assuming most bands name themselves arbitrarily or whatever sounds cool. Imagine our surprise when we learned that Boston singer/songwriter Dave Munro named his band Air Traffic Controller after his experience as an actual air traffic controller in the U.S. Navy. When he returned from service to find that the demos he’d sent home while deployed had garnered him a solid fanbase, he rounded up five of his friends to create the band in its current form. Featuring instruments including banjo, violin and viola (and sometimes a full string ensemble during live performances), ATC’s lush, orchestral sound puts it in the same league as the likes of the Decemberists and Mumford & Sons. Sophomore album Nordo is out now on Sugarpop Records. To celebrate this much-anticipated release, Munro made us a mix tape of some of his favorite songs.

The Spinto Band “Oh Mandy”
I’ll get into more detail for the other songs, but this one just rules, period. Nothing makes me happier. It should be the lead track on every mix tape. Video

Delta Spirit “California”
I ran into Delta Spirit lead singer Matt Vasquez in a thrift store in Boston. I tried to talk him out of buying this long coat he tried on, but he bought it anyway and wore it out. Strangely, it was cooler once he owned it. These guys rock so hard, but their roots are pure folk. I love that! They were my underground faves, but this song is blowing up. It’s the most fun, sad song ever. Video

Ferraby Lionheart “Harry And Bess”
Ferraby’s sound is so old fashioned, yet it’s the most refreshing album I’ve ever heard. He slept on my apartment floor after we played a show together in Cambridge. I should’ve given him the bed; the guy is a legend in my book. This video is fun; it features Rainn Wilson from The Office. The song is a great story about a magic show where Harry Houdini’s girlfriend kissed him, slipping a key into his mouth so he could escape a pair of handcuffs. Video

Wild Light “California On My Mind”
Not enough people know about this song, so it is my duty to add it to every mix tape. It’s a smash hit; it’s just the one that got away. Video

First Aid Kit “Heavy Storm”
I was lucky enough to catch these two Swedish sisters in a small club in Allston (Great Scott). My brother plays drums in ATC, so I know how strong a musical bond can be between siblings, but these two girls are like one voice. They’re extraordinary. Video

Good Old War “My Own Sinking Ship”
We played a college show with Good Old War, and halfway through their set, they unplugged their gear, hopped off stage and played the rest of the night in the audience. The crowd gathered around them and sang every word; it was like the ’60s or something. There wasn’t a person in the audience who didn’t want to be a part of this unforgettable moment. This is my favorite song by them. They sounded this awesome that night. Video

The Magic Numbers “Love Me Like You”
I went to a Bright Eyes concert years ago, and The Magic Numbers opened. They totally blew everyone away. Feist followed them on the bill that night also. She was solo, and I felt so bad for her to have to take the stage after this amazing, uplifting band. This group is so old school and doo-woppy, but it’s a bit psychedelic at the same time. I love fun songs that are only heartbreaking when you read the lyrics. Video

Jason Falkner “She Goes To Bed”
Jason Falkner came from one of my all-time favorite bands, Jellyfish. He was the first guy to make me realize I could record a full song all-by-myself. When I discovered him, I was alone in the Navy working as an air traffic controller with no band and a lot going on in my head. I got a four-track recorder as a gift. It truly changed my life. Video

Bleu “How Blue”
I was a bit of a fanatic for Bleu before he became our producer, so I don’t consider this choice to be ass-kissing at all. I could’ve picked almost any song of his, but since we’re including video links, I’m choosing his best video, which stars Justin Kirk from Weeds. It’s got a great ending. Video

Paul McCartney “Every Night”
McCartney could’ve hired anyone to make his first solo record, but he just did it himself. I think this is him at his core, his best. Video

Nena “99 Red Balloons”
This sexy German singer was my first crush, and this was my first “favorite song.” One of ATC’s new songs, “You Know Me,” kind of has this vibe, I think. Totally unintentional. Video

Mason Jennings “Big Sur”
I was in a car-chase situation with Mason Jennings after a theater show he played in western Massachusetts. Why was I was driving behind him at a high speed and making all the same turns? It’s a long, innocent story; I honestly was not stalking him, but I was inspired by this incident and turned it into a song about chasing a girl and finding out it wasn’t her in the car (“Can’t Let Go”). Thanks Mason. I’m really sorry if I scared the crap out of you man; I can explain. Video

Traveling Wilburys “End Of The Line”
I’m wrapping all of my biggest influences into one selection. It’s not fair to them; they deserve individual cuts on this mix. The magic of this super group (Petty, Orbison, Harrison, Dylan, Lynne) was influential in recording our first ATC record. Video