As the author of The Boy Who Cried Freebird: Rock & Roll Fables And Sonic Storytelling, I’ve been known for dreaming up some kooky-but-believable urban legends in my time—a ghostly bonus track on the Robert Johnson CD collection, pianist Keith Jarrett angrily leaving the stage after somebody yelled “Freebird” during an encore, etc. The biggest problem I have is people actually believing the stories that I’ve made up, and thinking that my straight journalistic efforts are also fabricated. None more so than the phantasmagorical story of musician Daevid Allen’s ultra-freaky encounter with Sherman Hemsley (a.k.a George Jefferson), who passed away yesterday. It’s now well documented how much Hemsley loved progressive rock and was a fan of European bands like Gentle Giant, Nektar and Can, but it was Gong meister Allen who lifted the veil and let us all know just how wild and crazy Hemsley really was. Remember, you first read this piece in MAGNET back in 1999. It’s honest, verbatim and all true—unless its not. In any case, we’ll miss you, Sherman Hemsley—flying teapots and all. —Mitch Myers 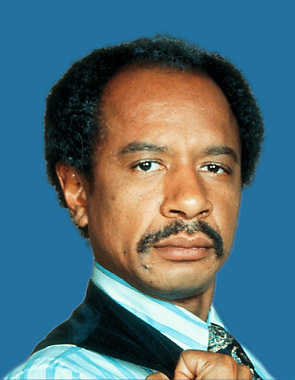 This is one of the most mind-blowingly weird anecdotes MAGNET has ever published. Ten years ago, writer Mitch Myers profiled prog-rock legend Daevid Allen (Soft Machine, Gong), who told us of his strange encounter with actor Sherman Hemsley (a.k.a. George Jefferson). Here is the story of Hemsley’s obsession with flying teapots and his alleged den of iniquity that housed an LSD lab, a harem of naked girls and crack/freebase depots on every floor.

In 1999, I interviewed musician Daevid Allen for MAGNET at a small recording studio in San Francisco. Allen was an odd sort, with plenty of old stories to tell. Back in the 1960s, he was a founding member of wonderfully creative British band Soft Machine. But Aleen didn’t stay with the Soft Machine for long and ended up forming another psychedelic rock group called Gong.

In his life, Allen has hung out with everybody from William Burroughs, Jimi Hendrix, Bud Powell and Paul McCartney to Syd Barrett, Keith Richards, Richard Branson and a whole bunch of other famous people that he can’t remember. One famous person Allen does recall spending time with is Sherman Hemsley, a.k.a. George Jefferson of ’70s sitcom The Jeffersons. Hemsley had been a jazz keyboardist before portraying Jefferson on television, and his progressive sensibilities led him to appreciate the offbeat sounds of Allen and Gong. Apparently, cosmic Gong compositions such as “Flying Teapot” and “Pot Head Pixies” resonated with the TV star’s psyche. Years after Allen’s encounter with Hemsley, the actor would go on to collaborate with Jon Anderson, lead singer of hugely successful prog-rock group Yes. The Hemsley/Anderson production was called Festival Of Dreams and supposedly described the spiritual qualities of the number seven.

“It was 1978 or 1979, and Sherman Hemsley kept ringing me up. I didn’t know him from a bar of soap because we didn’t have television in Spain (where I was living). He called me from Hollywood saying, ‘I’m one of your biggest fans and I’m going to fly you here and put flying teapots all up and down the Sunset Strip.’ I thought,  ‘This guy is a lunatic.’ He kept it up so I said, ‘Listen, can you get us tickets to L.A. via Jamaica? I want to go there to make a reggae track and have a honeymoon with my new girlfriend.’ He said, ‘Sure! I’ll get you two tickets.’

I thought, ‘Well, even if he’s a nut case at least he’s coming up with the goodies.’ The tickets arrived and we had this great honeymoon in Jamaica. Then we caught the plane across to L.A. We had heard Sherman was a big star, but we didn’t know the details. Coming down the corridor from the plane, I see this black guy with a whole bunch of people running after him trying to get autographs. Anyway, we get into this stretch limousine with Sherman and immediately there’s a big joint being passed around. I say, ‘Sorry man, I don’t smoke.’ Sherman says, ‘You don’t smoke and you’re from Gong?’

Inside the front door of Sherman’s house was a sign saying, ‘Don’t answer the door because it might be the man.’ There were two Puerto Ricans that had a LSD laboratory in his basement, so they were really paranoid. They also had little crack/freebase depots on every floor. Then Sherman says, ‘Come on upstairs and I’ll show you the Flying Teapot room.’ Sherman was very sweet but was surrounded by these really crazy people.

We went up to the top floor and there was this big room with darkened windows and “Flying Teapot” is playing on a tape loop over and over again. There were also three really dumb-looking, very voluptuous Southern gals stoned and wobbling around naked. They were obviously there for the guys to play around with.

[My girlfriend] Maggie and I were really tired and went to our room to go to bed. The room had one mattress with an electric blanket and that was it. No bed covering, no pillow, nothing. The next day we came down and Sherman showed us a couple of [The Jeffersons] episodes.

One of our fans came and rescued us, but not before Sherman took us to see these Hollywood PR people. They said, ‘Well, Mr. Hemsley wants us to get the information we need in order to do these Flying Teapot billboards on Sunset Strip.’ I looked at them and thought they were the cheesiest, most nasty people that I had ever seen in my life and I gave them the runaround. I just wanted out of there. I liked Sherman a lot. He was a very personable, charming guy. I just had a lot of trouble with the people around him.”

Post script: After completing the MAGNET article, I ran the finished text through a computerized spell check. Upon encountering Daevid Allen’s first name, the (Word Services) Apple Events Spellswell7 instructed me to replace “Daevid” with the word “teapot.” Somewhere in Silicon Valley, a very clever Gong fan was laughing.

Mitch Myers is the author of The Boy Who Cried Freebird: Rock & Roll Fables And Sonic Storytelling.