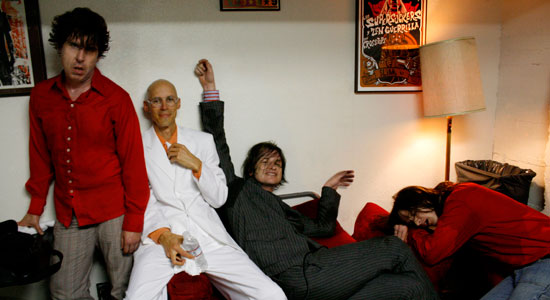 Ever out of step with the cool kids, Redd Kross is finally ready for its close-up.

“We are a weirdo band. We never really fit into any one thing. We’ve kind of been alongside—might have been adjacent to—certain movements, but never been in the middle of any particular movements. The second you could say we were a part of something, we then rejected it and did something totally different. We’ve never really been able to benefit.”

Steve McDonald, bass player and founder of legendary L.A. rock ‘n’ roll band Redd Kross, is on the phone, and MAGNET might be having a little trouble controlling our excitement. For starters, Redd Kross is releasing its first album in 15 years, which we honestly didn’t think was going to happen. Secondly, Researching The Blues is as close to our Platonic ideal of what a Redd Kross record (what a rock ‘n’ roll record) should sound like: punk rock fury mixed with power-pop hooks and tinged with a fringe of psychedelia. Researching embodies the best of what the band has done since it started out 34 years ago (during the first wave of L.A. punk) and continued throughout the ’80s and ’90s while taking perpendicular approaches to the prevailing trends of the era. Redd Kross has been our spirit guide for many a year, and MAGNET is more than a little stoked to be led out of the wilderness.

“I don’t think Redd Kross has ever taken on that kind of cause,” says McDonald. “I think we’ve always been our own weirdo Island of Misfit Toys.”

From the very beginning, McDonald and his guitarist brother Jeff have been one step to the left and one step ahead of their peers and contemporaries. During the height of the hardcore era, during the height of punk rock’s Year Zero mentality, Redd Kross was sporting long hair and covering the Carrie Nations, reveling in ’60s and ’70s pop culture well before that sort of thing was acceptable within the subculture. During the hair-metal years, the band eschewed spandex and hairspray for bell bottoms and freaky psychedelia. Then the grunge era hit, a time when Redd Kross’ predilection for ’70s hard rock and punk attitude would have been a perfect fit, except that the band had already moved along to well-tailored suits and soaring, Anglophilic hooks.

Redd Kross was always a band ahead of the pop-culture curve—the McDonalds loved the ’70s before VH1 was a twinkle in Viacom’s eye, their songs were a pastiche of references before the internet made that a requirement—so it’s no surprise that they needed to step away from the fold for a decade and a half in order for the rest of the world to catch up. Rarely has a reunion record felt more contemporary than Researching The Blues; if you were told that this record was made by 20-year-old kids who had just graduated from playing house shows and trading cassettes for gas money to the next town, you’d believe. The sonic and philosophical collage that has always defined Redd Kross has become de rigueur, what we expect from our underground rock ‘n’ rollers. In an age where the tenets of genre conventions and the rigidity that once separated sounds and scenes are no longer relevant, Redd Kross returns as prodigal sons.

“We haven’t put out a record in the internet age, and word travels so differently now,” says McDonald, who also produced the new album. “There’s all the downsides about how to monetize recorded music now, but the cool thing is that people will get to hear it really quickly. [Laughs] And news will travel fast. I would think that Redd Kross fan or not, an old-school fan or just new, young rock ‘n’ roll enthusiast kids, you’re gonna hear it and go, ‘Fuck, that’s rad—I want to hear it again.’

“I’ve spent a lot of time over the last 10 years working with a lot of younger bands, and I’ve worked at record labels as a scout—in a lot of ways, I’ve surveyed the landscape. I’ve got a sense of what’s going on out there. But I didn’t write these songs. I co-wrote one of these songs—‘Uglier,’ the third song on the record—but other than that, my brother wrote all these songs. I think for me it’s really neat that I’ve got this objectivity, that I got to approach it in the way I would approach any other band I’ve worked with. For me, it was just like, ‘Holy shit, this is really good; this is really exciting.’”

And the McDonalds weren’t the only folks who were excited; they even got a bunch of old friends to put out the record. That those friends happen to be Merge Records, one of the most respected, admired and successful independent labels in America, probably shouldn’t be a surprise; Merge’s punk-rock roots and art-minded sensibilities were in place long before it became a Grammy-winning institution. Combine the label’s commercial success with its recent mission to rescue classic indie rock from the cut-out bins of history—the recent Archers Of Loaf and Sugar reissues are must-owns—and its continuing willingness to put out adventurous new material from stalwarts like Lambchop, the Magnetic Fields and Wild Flag, and you’ve got a perfect home for a weirdo band like Redd Kross. All of which is funnier if you consider how Kross and the North Carolina scene came together.

“On our first tour in ’85, Bill and Barbara from (Raleigh, N.C., merchandise company) Tannis Root—it’s a reference to Rosemary’s Baby—invited us to stay at their place because we couldn’t find a hotel we could afford in Raleigh,” says McDonald. “We end up staying up all night making T-shirts from silkscreens they had made from the Madonna Penthouse spread that had just come out that month. We had been looking for it on tour, but it was pre-internet, so it was a big thing, these nude pictures from before she was a star that were the first ones to surface after she became a star. Not only could we not find that magazine, but when we finally did find it, these folks had it and had turned it into silkscreens. So, we made nude-Madonna T-shirts that eventually turned into the first Redd Kross T-shirts.

“And that just sort of sealed the deal right there, and we’ve become family with that group of people. Merge and Superchunk is sort of an extension of that family. So, when I finished the record in February, I sent it to a very short list of people, and they were definitely at the top of that list, and they came back super-excited.”

But the excitement isn’t just contained to the band and its friends in the Research Triangle. As the band has begun rolling out its new material and playing its first shows in years at festivals across the country, a groundswell of support has been coming from all across the internet, from new-school tastemakers like Brooklyn Vegan to old-media arbiters like the Wall Street Journal. It’s an odd mishmash of praise from strange corners of a society that’s only now catching up with the Redd Kross aesthetic, but it’s exactly the reception you’d expect for the return of one of America’s greatest weirdo bands.