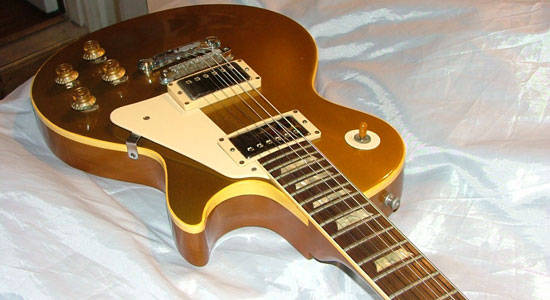 Shapiro: I have to say I prefer the sound and feel of vintage guitars. I usually buy ones with issues, therefore I don’t mind taking them on the road. There is just a sweetness that the new ones don’t have. Some of the historic or custom-shop Gibsons get close, but you could buy a vintage with issues for the same price. My main guitar lately is a 1969 Les Paul that’s been stripped of its gold paint on the front and routed for humbuckers. It has a one-piece body and neck similar to the ’50s era Les Pauls. This guitar seems to never let me down in a live situation, always sounds good and stays in tune. Another favorite, and the guitar I’ve owned the longest, is a 1964 Non-Reverse Firebird. It’s also been completely stripped of paint and now has humbuckers in it. This guitar fits my hands perfectly and is such a nice slab of resonant mahogany; the new versions of this are not even close. I do, however, appreciate the playability of some new guitars that are set up really well.