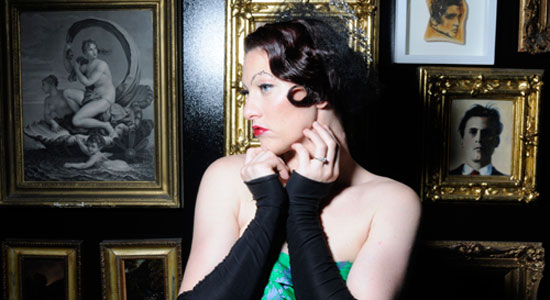 When Amanda Palmer has something on her mind, she doesn’t hold back.

She fills her blog with grand ideas, tweets her fleeting thoughts to 585,000 followers and, in the full-frontal video for “Want It Back,” wears her lyrics on her flesh. When she wanted to be free from Roadrunner Records, she sang “Please Drop Me” to the tune of “Moon River.” Rather than muse in private on her place in the pop pantheon, she did it in a ditty, “Gaga Palmer Madonna,” that she posted direct to YouTube. And after she raised nearly $1.2 million on Kickstarter for her new album, she used her blog to account for the money, then addressed rumors that she planned to donate the funds to the Church of Scientology by scrawling a denial on her naked torso.

But though you’ll get a peek at her plugged-in worldview on “Smile (Pictures Or It Didn’t Happen)” and other tracks from Theatre Is Evil, Palmer seems reluctant to elaborate, letting the songs speak for themselves. These days, she’s spending more time discussing her modus operandi than her music.

“I’m happy to be known for my business acumen,” she says, “but I would so much rather be known as a good performer and songwriter who happens to be clever when it comes to putting her music out.”

According to traditional thinking about what constitutes a proper release, it’s taken the piano-pounding Palmer four years to put out her second solo album. But she’s hardly been idle since 2008, when she and drummer Brian Viglione released the final Dresden Dolls disc and she co-produced her solo debut, Who Killed Amanda Palmer, with Ben Folds. In the interim, she partnered with Jason Webley for Evelyn Evelyn, a Siamese-twin song cycle and stage show; adapted Neutral Milk Hotel for a high-school drama production; pressed an EP of ukulele-based Radiohead covers; toured with husband Neil Gaiman; knocked out a quickie, kitschy collection of songs inspired by Australia and New Zealand; and revived the Dresden Dolls for a limited number of live dates.

“I’ve started calling me and my posse of friends ‘renaissance hacks’ because we’re all really good at a lot of things,” she says.

If one project doesn’t stick, the next is never far behind. The push for Theatre Is Evil began with a series of art-gallery shows in the early summer, then ramps up this month with theater dates to coincide with the album’s release. And then?

“Fucking endless touring,” Palmer says with a throaty laugh. “We’re going to get in a bus, and we’re barely going to get off that bus for 12 months.”

She’s got a lot of people to see: 136 backers tossed $1,000 or more toward the project, while 24,747 made smaller pledges. After setting a Kickstarter record, Palmer’s crowd-funding prowess has been extolled by the Wall Street Journal, Forbes and other publications that don’t know what to make of her music. And she’s OK with that. Talking about her career moves, like writing deeply autobiographical songs or shedding her clothes in videos, is a way of peeling back the mystique and connecting with her fans.

For Theatre Is Evil, Palmer’s assembled the Grand Theft Orchestra—multi-instrumentalists Jherek Bischoff, Chad Raines and Michael McQuilken—and made her least thematically unified record yet. It’s slow, sad and poignant at some points, brisk and bombastic at others. Palmer’s mercurial mood changes won’t surprise longtime listeners, but she’s never been so brazen about embracing the sounds of her formative years. “My musical DNA is straight out of 1983 to 1985,” she says, citing the Cure, the Cars, ABBA, Depeche Mode and the Thompson Twins. You can hear the decade’s influence in the big staccato drums on “Do It With A Rock Star,” the backing vocals of “The Killing Type” and a ton of new-wave synths.

“I don’t think I would have allowed myself to make this record six years ago,” says Palmer. “I would have been too embarrassed. I think I felt like I had to earn enough artistic cred that I could make this record, because this side of me, this pop side, is deeply ingrained.”

“Olly Olly Oxen Free” pivots between that pop side and apocalyptic cabaret while name-checking Moscow On The Hudson and Soft Cell tapes, and “Melody Dean” borrows so liberally from “My Sharona” that Palmer felt obligated to reference the Knack’s song within her own.

“A songwriter’s brain is a perpetual thief,” she says. “There’s nothing new under the sun. No melody exists in a vacuum, and it can actually be very amusing to follow the trail back way after the fact and see what it was that your little brain was doing without really being aware of it.”

Palmer acknowledges her influences on a more conscious level, too. For the album art, gallery mini-tour and accompanying coffee-table book, she tapped a few generations of renaissance hacks, including Robyn Hitchcock, Kristin Hersh and Conrad Keely (Trail Of Dead), to contribute portraits and pieces that reference her work, alongside more conventional contributors like Shepard Fairey.

“I think the coolest thing about having this container for art is that I could invite anyone I wanted at any level, from super-amateurs to painting professionals,” says Palmer. “And I made a point to try and think of every musician I knew who also created visual artwork. … I have a feeling they probably get more emails asking them to lay a vocal or a guest guitar track down on a song. But I don’t know how many times they get asked to make album artwork.”

Even as she dismantles the boundaries between artist and patron, she remains committed to the physical form, for the music itself and for all its trappings. Once she’s moved on to whatever’s next, the artists can reclaim their work and do with it what they will. If that means auctioning it and pocketing the cash, Palmer will do her part and spread the word to her fans, who’ve proven themselves eager to pay for the privilege. In an age of carefully cultivated images, Palmer is not afraid to let her seams show.

“My style turns a lot of people off, because they want the mystique and they want the clean image and they don’t want to deal with all the dirty shit,” she says. “And as far as I’m concerned, that’s fine. They just won’t buy my records and come to my shows. It’s OK.”