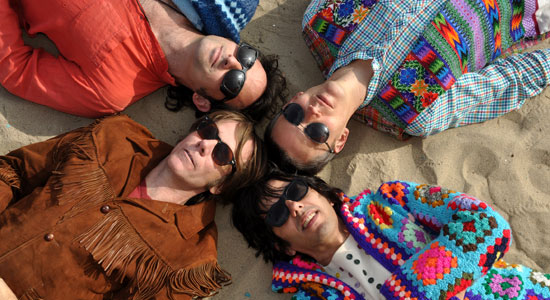 They burned brightly, but briefly. Now, they have rekindled the flame. For Beachwood Sparks, the metaphor is all too easy and all too apt.

Beachwood Sparks’ discography is succinct: 2000’s self-titled debut and 2001’s Once We Were Trees, plus an EP and a few singles, most released on Sub Pop. There wasn’t much, but there was something indelible about those records. They took the cosmic American music of the Flying Burrito Brothers and Byrds, added the bittersweet sounds of middle-period Beach Boys and Sister Lovers Big Star, then turned them into a sun-dappled, dreamy, psychedelic brand of alt-country.

“There wasn’t a ton of recorded stuff, but I think with the feel of it and the concerts that we did, there was a real vibe that we generated,” says Farmer Dave Scher.

In its brief lifetime, the band became a touchstone in the alt-country landscape, and its last major tour found the band opening for the Black Crowes. But after 2002’s Make The Cowboy Robots Cry EP, Beachwood had run its course, and the group disbanded amicably, five years after it formed.

“It was an organic process; nobody was ever served any papers and no one made any declarations of finality,” says Scher. “I think you’d liken it to a hibernation. I think maybe we just said, ‘Let’s sit the Bush years out.’”

“When I think about it, it didn’t seem super short, but now, 10 years later, it does,” says Chris Gunst.

Guitarists Gunst and Scher formed the band in Los Angeles in 1997 with bassist Brent Rademaker. They had a rotating cast of drummers, with Aaron Sperske the longest-tenured, and that’s the quartet behind The Tarnished Gold, the new Beachwood Sparks album.

When they started, everyone in the band lived near or with one another. The name combined two neighborhood streets (it doesn’t come from “Beechwood Park,” the song from the Zombies’ classic Odessey & Oracle, although that album is another distant ancestor to their style). The band played out constantly, and the concentrated tour/record/tour regime took its toll.

“There’s a stage when you’re a young dude in a band and you do everything together, pretty much,” says Scher. “I think we played that chapter out to the hilt. We’d been around, we’d been all over, we’d done a whole lot. I think that in time it just sort of played itself out. There was very naturally an ebb. Everyone drifted off; people moved to different cities and states and got into different stuff. It’s a healthy thing. If you’ve got to share a pair of pants with a bunch of people, it’s very hard. It’s easier when you’re young and that is your only focus. But there’s a natural evolution, and if things come back around again, it’s very cool. The pilot light never went out, apparently.”

Post-Beachwood, Rademaker and his brother Darren formed the Tyde, which initially included Scher and Gunst. Gunst moved to northern California and became a psychotherapist specializing in Buddhist psychology; with his wife Jen Cohen (formerly of the Aislers Set), he released two albums as the Mystic Chords Of Memory, including one with DJ Nobody. Scher was busy: He did a lot of guest pedal- and lap-steel work (for Elvis Costello, Pete Yorn, Gary Louris, Vetiver), formed All Night Radio, helped produce Rilo Kiley’s More Adventurous, became touring keyboard player for Interpol and released a solo album. (When we spoke, Scher had just finished surfing at Venice Beach with A.A. Bondy before they were to play a show at L.A.’s Natural History Museum.) Sperske, who had played in Kurt Heasley’s Lilys, became the drummer for Ariel Pink’s Haunted Graffiti.

In 2008, the band reconvened, sans Scher, who was unavailable at the time, to play Sub Pop’s 20th-anniversary party and followed that with a short tour. That got the conversation started about recording another album. Sub Pop said there was an LP left on the band’s original deal, and there was some money for it. The album took some time to gestate, but once Beachwood got together, with Thom Monahan producing, and pals such as Neal Casal and Ariel Pink helping out, the band found it easy to return to what Gunst calls “the well-oiled machine” of the past.

“All you had to do it take the cover off the car and turn the key,” says Scher. “Since our band is supposed to be like a country band, you’d say, like Gene Clark, ‘Funny how the circle is a wheel.’”

The Tarnished Gold is a logical extension of Beachwood Sparks’ past, which was itself a logical extension of the past of Parsons, Clark and the Laurel Canyon songwriters. It’s full of easygoing harmonies, swoons of pedal steel, gauzy melodies and plucky guitars.
“The tide rolls in, brings me back together with my friends,” Scher sings, taking a rare lead vocal on what could be the band’s new theme song, “Sparks Fly Again.”

“Past and present become the same thing,” Gunst sings on the ethereal, gently drifting “Leave That Light On,” one of the songs he cites as feeling like a new version of the band’s sound.

The first time around, Beachwood Sparks consciously looked back. Scher jokes about a photo in an old MAGNET piece in which he’s wearing a long dashiki (“They wouldn’t let me wear it in Interpol now,” he laughs), and Gunst says, “In the past, we were definitely into the artistic aesthetic of ’60s California groups. Sometimes when you look a certain way or you’re into a certain thing, people find it hard to hear the modernity in the music, too. We used a lot of the same instruments and things like that, but I thought we had a modern take on some of it, too.”

The Tarnished Gold actually sounds more modern than the others. It’s calmer, overall, than the first two, but it also may be a stronger set from start to finish, and it would segue easily into a Fleet Foxes, Clientele or Bon Iver album. But those connections are coincidental. Gunst wouldn’t claim that Beachwood was that influential.

“I don’t think we were in the consciousness to influence people all that much,” he says. “I hear some of that music, for sure, but I don’t feel connected to it, like, ‘These are my bros!’”

As far as the future goes, the band is in wait-and-see mode. Beachwood Sparks is definitely back together, although neither Gunst nor Scher wants to return to the grind of the past. They’re hoping that it will be easier for listeners to discover them now than it was a decade ago.

“I remember going someplace and someone saying, ‘We’re going to record you live for a webcast,’ and we were like, ‘What the fuck is that?’” says Gunst.

“Maybe now things are a little different,” says Scher. “It’s not the same as it used to be when MAGNET and Beachwood used to be around. It’s a different culture now. Maybe more people will find out about us, maybe there’ll be things we never got to do before. If nothing else, it’s nice to open up again and be part of the times.”