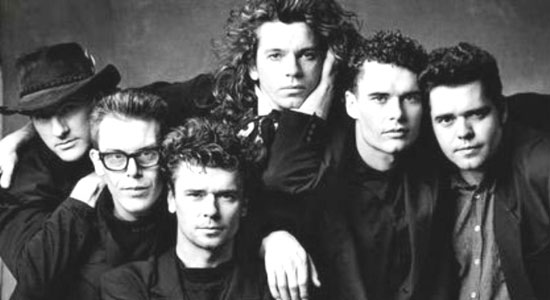 On the eve of the 25th-anniversary reissue of INXS’ Kick, MAGNET’s Hobart Rowland shows a little belated love for one of the most underrated frontmen in rock.

The edgy-slick embodiment of new wave’s final full-on infiltration of Middle America, INXS’ Kick sold a startling six million units, delivering four top-10 singles in the U.S. A quarter-century later, Universal is releasing an expanded edition of the still-kicking Aussie outfit’s sixth studio album this week. Assembled and sanctioned by the band, the heavily larded package includes two additional CDs and a DVD offering remixes, demos, unheard tracks, a documentary and even home-video footage. Word is, INXS devotees can choose from the four-disc “Super Deluxe” edition, a leaner double-CD “Deluxe” version, two different downloads, and a limited-edition red-vinyl release.  The Super Deluxe version also includes a 64-page booklet with handwritten lyrics by the late Michael Hutchence, who’s body was found hanging nude from the doorway of a hotel suite in his native Australia in November 1997. Upon his death, the tabloid rumors swirled: Was it suicide, or some autoerotic-asphyxiation experiment gone horribly awry? To this day, no one is 100-percent certain.

Cynics might contend that Hutchence’s unseemly end was at least somewhat logical—that, in living out the film-noirish implications of INXS’ 1990 hit “Suicide Blonde,” he’d succumbed to his hard-living playboy ways. Exactly a decade earlier, INXS had peaked in the U.S. with Kick, a hook-infested reconciliation of then-modern dance technology and the band’s pub-rock roots that, in retrospect, makes the Rolling Stones’ Emotional Rescue sound spineless by comparison. Arguably, the group was on its way to becoming Australia’s answer to the Stones, with Hutchence as the preening Pacific Basin personification of Mick Jagger. Ahead of its time, Kick was a deserving multiplatinum hit internationally. But its success was such a surprise to INXS that the band spent the better part of eight years trying to recover from it.  My introduction to INXS came with 1983’s Shabooh Shoobah, which helped to wrench my scrawny high-school ass out of its classic-rock coma, convincing me that you could be image-conscious, synth-happy and hit-savvy and still rock. In a way, it also persuaded me to take a chance on the group’s less-commercial (at the time) countrymen, Midnight Oil. That, in turn, opened my eyes to a tougher, more cerebral wave of ’80s rockers—everything from XTC to the Dream Syndicate.

A little later in life, my first adrenaline charge as a journalist came when the editor of my college newspaper led me backstage to meet INXS before its show in our campus gym. Kick had just been released, and the band was doing a string of university dates to warm up for a larger tour to come. I knocked back a few Coronas with bassist Garry Gary Beers, in awe of how down-to-earth he and the others were. Hutchence, meanwhile, was MIA.  Just as I was heading back to my seat, the singer made a brief appearance, an emaciated model draped over his shoulder. Looking bored, bleary-eyed and disheveled, Hutchence glanced around the room, grinned slightly and walked off without saying a word.

On stage that night, he put on a display worthy of the best frontmen in rock, and he did so for a measly few-hundred fans—style over substance perhaps, but he slayed us with charm. For that night, at least, Hutchence was bulletproof.

One reply on “Michael, Not Mick ”

My fave INXS LP is “Welcome to Everywhere”, containing “Heaven Sent” and “Baby Don’t Cry”, my two favourite INXS choons. But at this late stage, after a revolving door of replacement lead singers (including Terence Trent Darby and the notorious JD Fortune , the lads oughta just pack it in. Just sayin’.