Even if he wanted to, Giant Sand’s Howe Gelb couldn’t repeat himself. Just watch him sing sometime; the guy’s got two vocal mics, one distorted, one clean, and he doesn’t make up his mind which one he’ll be singing into until he’s halfway through his line. Tucson (Fire), Gelb’s latest release (credited to Giant Giant Sand), is named after his Arizona hometown. He will also be guest editing magnetmagazine.com all week. 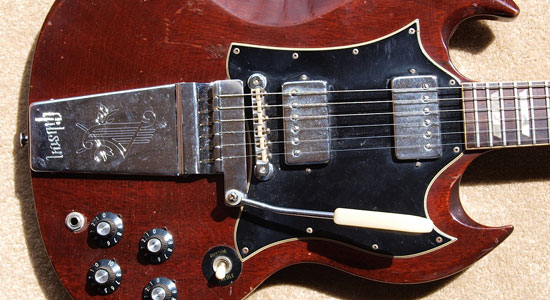 Gelb: You’re in a music store, a guitar comes along and finds its way into your arms, an embrace. A song immediately begins to form by playing this new-yet-old guitar, and it won’t stop. Most of the time you are in guitar shock and don’t know what to do. So you leave it behind at the shop, and all night long it haunts you. In the morning when you run back to the shop, the guitar is gone. Just sold an hour ago and gone forever. You’re doomed now, missing a thing that came all the way through history to find you, and you were so dizzy from its touch, that you let it slip away. It will happen again and again until you finally figure it out.

Getting rid of guitars is another thing, an impossible thing. However, here are my top-five examples of how to get rid of a guitar, from worst to best:

1. Be generous enough to hand over your favorite guitar, even if it’s a $75 Harmony, to your young bass player, Joey Burns, who is dying to learn how to play guitar and hangs on to it for two years. After realizing he’s now starting a band of his own inside your own band, it could be time to take the guitar back and enjoy it again. The guitar then gets stolen out from your rental car trunk in New York City while you had to pee so bad from the tunnel traffic that you forgot you opened the trunk when you ran up to a friend’s apartment to piss.

2. Give back your ’68 Gibson SG to the shop hoping to afford it back again before it gets sold. But too late, the Black Crowes nab it, and that lonesome night in a German pension basement room, wide awake after a bad solo gig,  you are forced to watch the only thing on TV, a live concert of said Black Crowes, and there is your guitar on the screen serving now only to taunt you.

3. Sometimes after a buying impulse, you realize you can’t afford the guitar. So you decide to sell the 1934 National Resonator guitar to a good friend like John Parish in the U.K., who to this day still plays it onstage and in recording sessions with PJ Harvey. So you can visit it, especially when staying over.

4. When your current bass player, Thøger T. Lund, turns 40, you hand him your 1958 National Archtop and feel all the better for it. Being 40 deserves such a thing, but his constant reteaching of your own back catalogue practically warrants such a gift.

5. Handing down your 1962 red Gretsch Duo Jet, which was responsible for your first 10 or 15 albums, to your first born is absolutely sublime. There is no better way of getting rid of a guitar. To see her have at it, watching her see the beauty in it and finding the guitar as alive as you once did, is just a thing of stunning satisfaction; an heirloom, a sonic baton and a way of life.