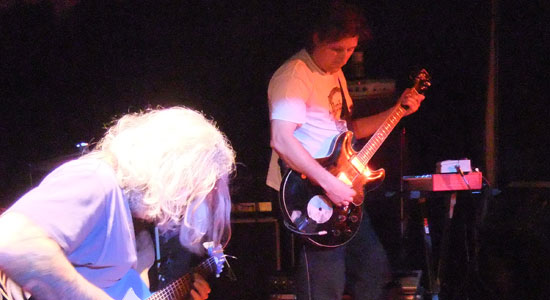 Sitting on the confluence of the Loire and Erdre rivers, the city of Nantes in Southern Brittany is not just an intersection of maritime traffic but also of creative diversity. Nantes is the birthplace of science-fiction pioneer Jules Verne and the muse for his fantastical stories. It was here that poet André Breton met Jacques Vaché, who inspired the former’s imaginative mind-fuckery of surrealism. Even today, Nantes is home to a vibrant rock and electronic music scene as well as a theatre troupe that conjures 20-foot mechanical giants and time-travelling elephants to lumber through her cobblestone streets.

So it is fitting that one of the premier space-rock bands would bring its travelling acid trip to this immense bong bowl of 800,000 souls. Carlton Melton—two members of whom were formerly in Philly and San Fran favorites Zen Guerrilla—played the closing night of the city’s 10th annual Soy Festival. The contrast between the band’s recording space and the venue for this show could not be greater. They improvise their albums in a geodesic dome deep in the woods of Northern California, while Nantes’ Stakhanov club is a cramped duplex stinking of stale French beer.

Their performance begins without fanfare. In fact, the line separating guitar tuning and opening notes is so fine as to be imperceptible. With “PhotosOf Photos” and “Smoke Drip,” Andy Duvall teases light pricklings from his guitar, which Rich Millman complements with soft, ethereal chords. “Space Treader” then swells and contracts, oozes and bleeds. Once Clint Golden’s bass and Millman’s guitar converge to give form to a more traditional structure, Duvall sits behind his drum kit, and “The One That Got Away” roars to life like a starship achieving escape velocity. The trio goes from emitting a wavelength to riding a groove.

The band is now a ramscoop collecting stray notes, synth farts and fragments of Hawkwind, Spacemen 3 and Bardo Pond to gain speed. They close with the monumental “When You’re In,” a Pink Floyd cover that rages until it tears itself apart, atom by atom, note by note. In the outro, Millman methodically downtunes the low E string to emphasize the song’s disintegration. Its effect is as chilling as it is bowel-loosening.

Carlton Melton’s set is the Big Bang in reverse.

A hypnotic drone of dispersed notes awash in echo coalesces into a rush of accelerating energy that, in turn, culminates in a massive wallop to the gut. The band sets controls for the heart of the sun, then slams its ship into the furnace of hell. After that, what the fuck do you do for an encore?

I need to check these guys out…