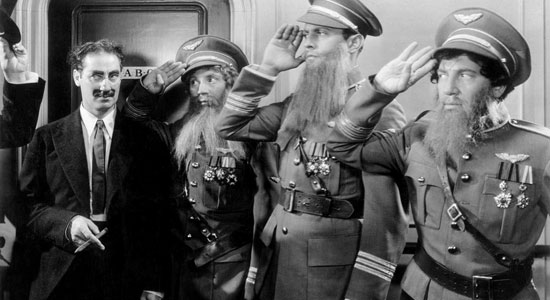 The distinct personalities of the Marx brothers were established during their vaudeville years, long before their 1929 feature-film debut, The Cocoanuts. With his grease paint-enhanced mustache and bent-over duck walk, Groucho was the wisecracking, cigar-smoking top banana; Chico (pronounced “Chick-o” for his skirt-chasing antics) was the piano player; and Harpo with his curly, red, Bob Dylan-like wig was a mute who strummed the harp.

A wealthy dowager, Mrs. Claypool (Margaret Dumont), has been stood-up by her dinner date in a posh restaurant. “Boy,” she calls. “Will you please page Mr. Otis B. Driftwood.” By the time he’s made one circuit of the room, he gets a response from the man seated next to Mrs. Claypool, but facing the other way. “Boy, will you do me a favor and stop yelling my name all over this restaurant. Do I go around yelling your name?” says Driftwood (Groucho Marx).

“I’ve been sitting here since seven o’clock,” she reprimands him. “Yes, but with your back to me. When I invite a woman to dinner, I expect to look at her face,” says Driftwood. “Your check, sir,” says the waiter. “Nine dollars and forty cents? This is an outrage! If I were you, I wouldn’t pay it,” he says, tossing the bill onto the plate of his blonde dining companion before joining Mrs. Claypool.

“Now what are we going to have for dinner, Mrs. Claypool?” asks Driftwood. Before she answers, he buttonholes the waiter. “Have you got any milk-fed chicken?” he asks. “Well, squeeze the milk out of one of them and bring me a glass.”

Driftwood convinces Mrs. Claypool that her place in society will be assured if she donates $200,000 to the New York Opera, and he introduces her to Gottlieb, their financial director. After Gottlieb (Sig Ruman) bends to kiss her hand, Driftwood grabs her arm. “I just wanted to see if your rings were still there,” he says. “Listen, Gottlieb, making love to Mrs. Claypool is my racket. What you’re after is $200,000. And you’d better make it plausible because, incredible as it may seem, Mrs. Claypool isn’t as big a sap as she looks.”

After a rousing performance of Pagliacci, the next evening, Gottlieb warns Mrs. Claypool, “If you’ll pardon my saying so, Driftwood hardly seems to be the person to handle your business affairs. ” Having directed the cabbie to drive once more around the park, Driftwood bursts into their box just in time to miss the opera. “Isn’t Lassparri the greatest tenor since Caruso? He would be worth a thousand dollars a night!” gushes Gottlieb. “You’re willing to pay him a thousand dollars a night?” exclaims Driftwood. “Why, you can get a phonograph record of ‘Minnie The Moocher’ for 75 cents. For a buck and a quarter, you can get Minnie!”