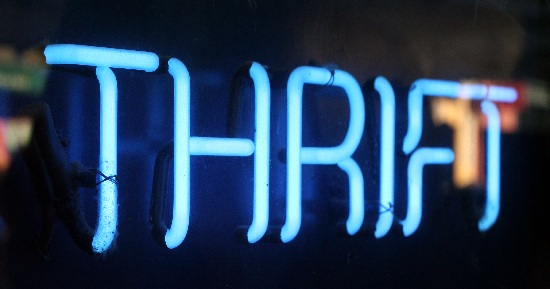 Hogan: Stuff I Love About Thrift Stores.
1. That they’re like natural history museums where you can afford to buy the artifacts.
2. When you can tell by the fixtures (or the stairs or where the linoleum stops and starts) what the thrift store was originally—like a grocery store or department store. Bonus points if the store name is spelled out in floor tile anywhere “Zayres” or “Grants” or “Kresge’s.”
3. Finding names written inside collars in magic marker (don’t worry, Edna Roberts of Room 112—I’ll treat your flannel nightgown with all the respect it deserves).
4. That they’re usually located next to a Beauty Supply Shop (false eyelash glue, anyone?).
5. That it forces you to have to work to shop. When you dig and sweat, and sweat and dig and then suddenly find something killer for $1.41, it’s way more of a pay-off than pulling it off a shelf at Target.
6. Finding things left in pockets (a Kiwanis medal, a monogrammed hankie, a wedding invitation) or slipped in-between pages of books (dirty photos, grocery lists, or fifth grade notes written in pencil “Felicia is a ho. She so mean.”) or finding seeds and stems in fold-out double albums. Dude …
7. Noticing that some surviving family member who never appreciated a deceased someone’s precious collection probably just swept it all off a shelf and took the whole caboodle (ceramic unicorns, carved wooden seabirds, commemorative plates, shot glasses, Dutch wooden shoes, salt & pepper shakers and clowns … lots and lots of clowns) to the Goodwill. Kinda sad, but interesting to see what folks racked up over a lifetime.
8. Finding certain disturbing phrases underlined in books. I can think about that shit for days, like why did someone highlight “‘the coming apocalypse is predestined and unavoidable” in pink? And where are they hiding?
9. Buying stuffed animal toys for my dogs for 25 cents each, as opposed to $10.00 or more in a pet store, for something they’re gonna destroy anyhow. And picking the toys that will be funniest to watch get eaten: Cabbage Patch cheerleader dolls, “Now I Lay Me Down To Sleep” praying dolls, Barney, Elmo, Yosemite Sam … (Just be sure to stick to fluff-stuffed toys! Avoid toys with wires, pellets, beanbag stuff or other harmful swallow-y things inside—common sense, people!)
10. That they’re always cranking “The Oldies” (I won’t stop shopping until I hear at least one song by Whitney Houston or the Little River Band.)

Stuff You Gotta Watch Out For in Thrift Stores.
1. Just accept that the B.O. smell is never gonna come out of that leather jacket. It just won’t. Ever. Yeah, it looks cool, but don’t buy it!
2. Your hands will get dirty. Like black with dirt! Don’t touch your eyes!
3. In addition to Whitney and LRB, you will also hear a lot of Celine Dion.

One reply on “From The Desk Of Kelly Hogan: Stuff I Love About Thrift Stores”

Three days ago at the Value Village on Roscoe, (you know the one) fantastic red and black mens kimono with black pants with thin gold piping at the ankles! Whoo-Hoo, yeah you rite! Thrift on.