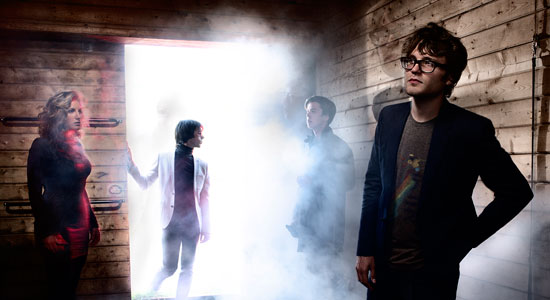 Long before Ra Ra Riot performed a single note of its dancetronic third album, Beta Love (Barsuk), the band talked at great length about the need for a change. The viscerally charged chamber-pop outfit had maintained a steady course after the tragic 2007 drowning death of beloved drummer John Pike, blossomed on its 2008 Barsuk full-length debut, The Rhumb Line, and flourished with a variety of subsequent beatkeepers, but everyone felt the inevitable tug of creative evolution after 2010 sophomore album The Orchard.

Well, almost everyone. Cellist Alexandra Lawn was perhaps less enchanted with the directions being discussed, which ultimately led to her departure early last year. Lawn’s resignation opened the floodgates for Ra Ra Riot to push its already strong new-wave roots down a new electronic path.

“After Ali left, that allowed us to change even more than we thought we were going to be able to,” says frontman Wes Miles. “The way we used to work, I or someone in the band would have a demo and we would run it through the Ra Ra Riot machine. That sort of became a burden after a while, this sort of additive, stapling onto the demo of instrumentation when all of the songs may not have benefitted from that process. We wanted to pare things back and have more space.”

The roles of violinist Rebecca Zeller and guitarist Milo Bonacci changed the most dramatically; with the dominance of the synthesizer on Beta Love, Bonacci was forced to radically reimagine/rewrite his guitar contributions and take on more expansive sonic duties, while Zeller, who wrote all previous string arrangements with Lawn, was freed up to explore new approaches with her instrument and the spare strings the band utilized.

“Becca said she was most excited about the string arrangement on ‘Dance With Me,’” says Miles. “It was just two notes. It’s so simple, but it’s something we never would have done before. Milo may have had the most interesting role for this record. He’s into tweaking stuff on a very final level, but it was more than that. He worked on what the song needed on a more whole level. That was an important step for all of us, to get to that mentality. Now, nothing is precious. We don’t have to be hamstrung by instruments. They can work without getting in the way of the melody or the song.”

While Ra Ra Riot continues to be guided by many of the new-wave influences that informed its first two albums and a handful of EPs, Miles notes that Beta Love evolved from a variety of fresh new sources.

“You always find new things in music that you like, and not just new music, but things you hadn’t heard in the same way before,” he says. “There’s a lot of science fiction from books I had just read. I got into William Gibson in the middle of thinking about this record, and (bassist) Mat (Santos) and I really got into Ray Kurzweil as a scientist and conceptualist, and that influenced the lyrics as well as the music. We took more electronic sounds that may have been inspired from Devo or Kraftwerk. In the past, that stuff was a drone and didn’t really do much.”