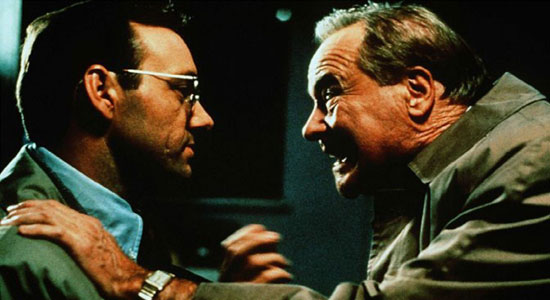 A pair of downtrodden real-estate salesmen are feeding dimes into a couple of pay phones on a rainy night in the city. Shelley Levene (Jack Lemmon) is reassuring his wife that he’ll be home soon, making little kissing sounds into the receiver. Dave Moss (Ed Harris) waits to speak with a potential buyer. “Bunch of bullshit!” mutters Moss. “The waste of a good man’s time trying to make a living on these deadbeat leads.”

Suddenly, someone’s on the line. “Hello, Mrs. Swoboda, it’s Dave Moss. We spoke yesterday on the Rio Rancho Estates,” he says, changing gears. “We’ve had a situation come up. The president of our company is in town for just one day, and he’s made certain parcels available for the next 48 hours. Listen to me. I’ve got 48 hours to make you a lot of money,” says Moss, irritated at some resistance. “OK, I’ll call you back in 10 minutes,” he says, stifling the urge to slam down the receiver.

Moss and Levene slog across the rain-drenched street to the office of Premier Properties for a mandatory 7:30 meeting. “Are you ready to do or die tonight, Shelley?” asks office manager John Williamson (Kevin Spacey) as they wash their hands in the rest-room sink. “Always ready, John. I understand we might get some new leads,” Levene replies. “That’s what we’re gonna talk about at the meeting. I’ve seen your sales figures,” says Williamson ominously.

With no warning or introduction, an impeccably tailored and barbered Blake (Alec Baldwin) strides into the office and begins speaking to the staff. “Let me have your attention,” he says. “You’re talking about how some sons of bitches don’t want to buy your land. Let’s talk about something important. Put that coffee down!” he barks directly at Levene, pouring himself a cup in the back of the office. “Coffee’s for closers only. You think I’m fucking with you?” he says walking slowly toward Levene. “I’m not fucking with you. I’m here from downtown on a mission of mercy. Your name’s Levene?” Blake asks menacingly. “Yeah.” “You call yourself a salesman, you son of a bitch?”

“I don’t have to listen to this shit,” moans Moss, getting to his feet to leave. “You certainly don’t, because the good news is: You’re fired!” spits out Blake, turning toward Moss. “And the bad news is you’ve all got one week to regain your jobs, starting tonight. Oh, have I got your attention now?” he says as though he’s talking to a roomful of imbeciles.