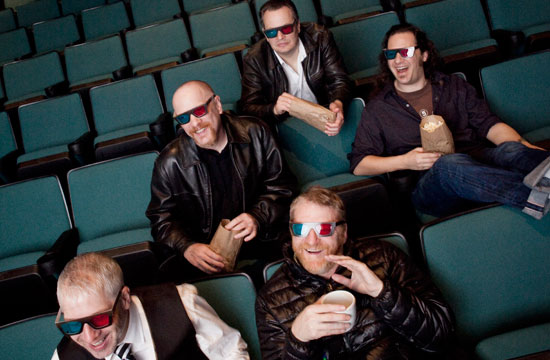 Segel: Camper Van Beethoven is 30 years old this year. That’s unbelievable, in so many ways! While we weren’t a band (at least not together) for most of the ’90s, we’ve actually been back together for longer than we were a band in the ’80s. Most of us played in other bands before CVB, of course, in high school and in college, but CVB formed while we were in college at UCSC, and we started touring immediately thereafter. I would say that any band can rehearse the shit out of some piece of music, but what you learn by performing it is worth 10 or more rehearsals.

So CVB disbanded (dissolving “like a urinal cake”) in 1990, and David Lowery formed Cracker, who played non-stop throughout the decade. Victor Krummenacher, Greg Lisher, Chris Pedersen and David Immerglück still had their “side project,” the Monks Of Doom, which played and toured until the mid-’90s, when Crispy moved to Australia, Immy started played with John Hiatt and then the Counting Crows, and Victor started his own band(s). I fronted my own bands Hieronymus Firebrain and Jack & Jill (and my own name, which is Jonathan Segel) and played the utility musician for Granfaloon Bus, Dieselhed, Clyde Wrenn and Sparklehorse. The first signs of Camper actually playing together again were in the late ’90s, when we’d sit in with Cracker for some CVB tunes.

When we finally decided to “be a band” again and actually do a show as Camper Van Beethoven proper, we got together at a rehearsal studio in New York in preparation to do a couple nights at the Knitting Factory. We just made a list of every song on every record and tried to play them. There was no way to remember all the songs, at least not in your head, but if we let the old muscle memory control it, we could actually get through most of them. But what struck me most about these rehearsals (and we’re not a band big on rehearsing) was that as I looked around the space I realized that I knew how everybody played. These were the people that we learned how to play in band with. And 10 years down the road, we all came back to it with new perspectives and a decade more technical ability, but we still played like ourselves, and I could recognize it and be comfortable with it.

Now, almost another whole decade later, we’re still getting better at playing our instruments and at playing in the band. It’s now striking me as such a funny thing that people are so into the latest band of 20-year-olds to hit the scene, when the guys that can actually play are the old dudes who’ve kept at it for so long. I honestly wonder when I hear new bands how many of these guys will still be playing in 20, 30, 40 years.

It’s not just the technique, though that can be obvious as well, but the idea of playing together. I certainly feel like I’ve gotten better as a musician (though I’d still give it another 10 or 20 years before I’d say I’m good at playing the violin), but more than that, I feel like we’re all better at playing together. For example, Camper played a bunch with Yo La Tengo back in the 1980s, and then they continued. I saw them several times over that past number of years, and then a couple years back I sat in with them for a show in San Francisco. Damn they were good. They just get better.

Even Led Zeppelin showed that at the O2.

So when Camper got together to sit around in my living room—with instruments—in Oakland (before I left) to write what became La Costa Perdida, we were already so comfortable with how to play together, that we managed to add, subtract, multiply and divide musical ideas so efficiently that we wrote more music than we needed to make a new record. We might make another one! This was actually a lot of fun!

2 replies on “From The Desk Of Camper Van Beethoven’s Jonathan Segel: Being A Band For So Long That You Actually Learn How To Play”

Like a fine wine Camper just gets better with age! Good stuff!

[…] From The Desk Of Camper Van Beethoven’s Jonathan Segel: Being A Band For So Long That You Actually… […]