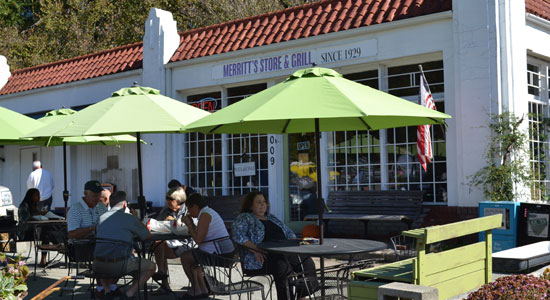 Stamey: Some folks travel to North Carolina in search of the barbecue, and in fact around these parts the name “Stamey” usually brings with it connotations of pulled pork more so than music, as a wing of my family carved out a distinctive niche in barbecue circles long ago. But when I want to travel in search of nonvegetarian delight, I go to Merritt’s Store & Grill, of Chapel Hill, who are a pilgrim’s choice for BLTs magna cum laude. Bob and Robin Britt, who took over from Mr. Merritt in 1972, respected the country style of the legendary hangout, thought to be where James and Livingston Taylor honed their performing styles; little has changed, decorwise, since the 1929 opening. But the Britts decided to focus on doing one thing especially great and have somehow managed to elevate the humble bacon-lettuce-and-tomato (ah, those tomatoes, no matter the season!) sandwich to high art. Legend goes that the Grateful Dead, et al, parked their buses across the street one day and more or less moved in for a while before resuming their tour. It’s a place where the town elite sit down with the folks who cut their grass and dissect the issues of the day together. Fiddler Bobby Britt, Jr., is a bluegrass Paganini, and his influence is felt in the regular pickin’ that goes on, unamplified, by the cash register. I always feel like I am an influence on the musicians I record, but is my influence as great as the daily intake of Merritt’s they usually insist on, after that first initiation? I somehow doubt it.