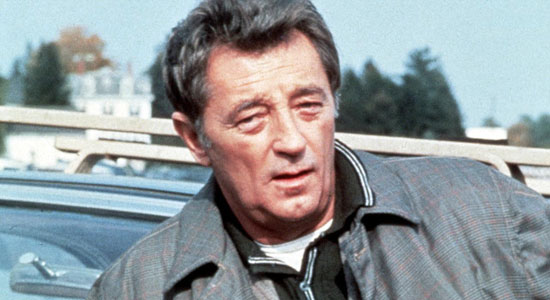 A silver Mercedes pulls into a parking spot labeled “Mr. Partridge” at a branch of Boston’s South Shore National Bank. After carefully looking around, the bank manager walks toward the front door and waits for an employee to let him in. A red Wells Fargo armored delivery van parks near the bank’s side entrance, and a guard wielding a shotgun walks to the door. Another Wells employee carries three canvas sacks of cash into the building.

Two men parked on the street take careful notes. One of them dons horn-rimmed glasses and a homburg and enters the bank to make change for a 10 spot while casually noting the location of the security cameras.

It’s just another day in the lowball world of Eddie Coyle (Robert Mitchum), a career criminal on the bottom end of the food chain, facing hard time in a New Hampshire prison. Coyle orders a slice of cheese pie and a cup of coffee from a greasy-spoon cafeteria and sits down opposite a man half his age. “I can get you six pieces by tomorrow night,” says the young gun-runner. “I can get more, but I’ve promised somebody else.” “I don’t like that, makes me nervous,” says Coyle.

“You know what that is?” asks Coyle, extending his hand. “Your hand,” answers the mug, rolling his eyes. “I hope you look closer at those guns than you did at the hand. Count the knuckles. I’ve got twice as many as you,” says Coyle, displaying his souvenir for selling traceable guns to a client. “They put your hand in a drawer and somebody kicks the drawer shut. You hear the bones break—hurts like a bastard.”

As the bank manager sets off for work the next morning, he finds three men in see-through plastic masks painted with garish facial features holding his wife and children hostage in the living room. “Mr. Partridge,” says one, “We are going to your bank. My friend will stay here with your wife and children. Nothing will happen to them if you do what I tell you. If you don’t, at least one of them will be shot.”

With the bank employees seated on the floor, the masked men cover the security cameras with duct tape. Partridge tells his staff the ground rules: “When the vault opens, these men will take what they came for. They have told me no one will be hurt if no one interferes. Everyone, please cooperate.” With the heist complete, Partridge is blindfolded and set free 100 yards from the Atlantic shore. “I’ve got the window down and the gun’s on you,” says one bank robber. “Count to 100 very slowly. That’s when you’ll be safe. Start walking, Mr. Partridge.” At 100, Partridge removes his blindfold and turns around. The men have vanished.