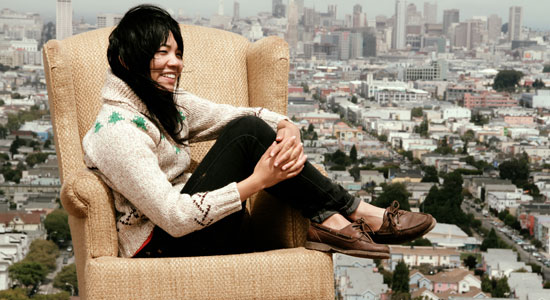 Thao Nguyen is a tireless performer. She’s been touring with her band, the Get Down Stay Down, since she graduated from college, and is used to the rigors of the road, including backhanded compliments like, “You play pretty good for a girl.” Nguyen laughs. “That only fans the flames and makes me want to play even better.”

Anyone who has ever seen her live, or listened to one of her records, knows how far off the mark that comment is. Nguyen is one of the most innovative guitarists around, with a style that blends grinding power chords, the jittery fills of a funkateer, a dash of country twang, clanging rock guitar pyrotechnics and staccato single-note runs that add a skewed melodic feel to her songs that’s halfway between bluegrass and hip hop.

“I developed my feel practicing in my bedroom,” says Nguyen. “I loved Motown, bluegrass and old country songs. Since I was playing alone, I filled the sound out with percussive rhythm playing. I started doing open mics. I wanted to present myself as a guitar player. People see I’m a girl with a guitar and they jump to conclusions about what I can or cannot do.”

Nguyen started playing solo, but after drummer Willis Thompson joined her, things took off. After hearing her 2005 debut, Like The Linen, Laura Veirs took her on tour and helped get her signed to Kill Rock Stars for 2008’s We Brave Bee Stings And All and 2009’s Know Better Learn Faster. Between tours, she moved to San Francisco and took a year off to write the songs that became We The Common (Ribbon).

“Know Better was recorded at the end of a relationship,” she says. “It was introspective and self-involved. This album is a celebration of connection and community, stories of people sticking up for each other. There’s still a lot of longing, but this time I’m more hopeful. I’m not sinking into the well of loneliness.”

We The Common was recorded at Tiny Telephone Studios in San Francisco with producer John Congleton (St. Vincent, Bill Callahan, Walkmen). It features contributions from friends who add xylophone, cello, harpsichord, piano and horns to Nguyen’s inventive arrangements. “It was great to have people come in and add their input and take the songs in new directions,” she says. “I was open to any idea that served the meaning of the lyrics.”

Winning tracks include the edgy funk of “City,” the ominous seduction of “Clouds For Brains,” the slow stomp of “The Feeling Kind” (which blends tango with ’50s R&B) and the cowboy swing of “Kindness Be Conceived,” with Joanna Newsom adding harmony vocals. Nguyen’s guitar and Jason Slota’s drumming skitter in and out of the mix, adding ingenious grace notes and breaking the rhythms into unexpected meters to serve Nguyen’s unique, slightly-before-the-beat vocals.

“I didn’t try to develop a singing style,” says Nguyen. “I listen to a lot of old country music and hip hop. I like the way syllables and cadences are manipulated in both genres. If that contributed to my sound, I wasn’t conscious of it.”