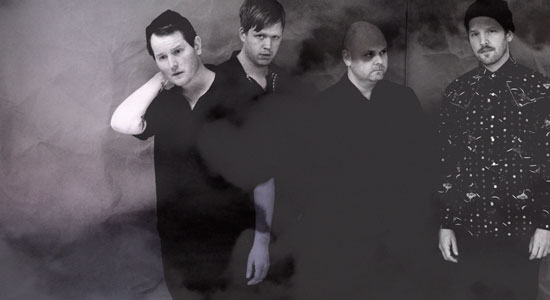 That’s how Philip Ekström describes Hit The Waves (Labrador), the new album from his band, the Mary Onettes. It’s the long-awaited third full-length from the Gothenburg, Sweden, quartet, and it largely abandons the soaring pop that was the Mary Onettes’ hallmark on its 2007 self-titled debut and 2009’s Islands. Those albums earned the quartet comparisons to the Cure and Echo & The Bunnymen, although polished with a modern synth-pop sheen. Hit The Waves draws likewise from the ’80s, but instead of tuneful post-punk, it deliberately echoes some less trendy sources.

“We used a lot of synthesizers and sounds that maybe people would be like, ‘Oh no, don’t do that!’” says Ekström, who speaks quietly, but laughs often as he talks about the album. “Some artists that were big in the ’60s and ’70s, when the ’80s came, (they) didn’t know what to do about their sound or their music. So, they made these cheesy albums in the ’80s. Neil Young, Bruce Springsteen, Patti Smith did some very ’80s albums. For a long time, people thought, ‘Oh no, the ’80s albums were crap,’ but now people realize the cheesy stuff is kind of cool. We wanted to make that album.”

Like Destroyer looking back to Roxy Music’s Avalon for Kaputt, or the Rosebuds doing a full-album cover of Sade’s Love Deluxe or, more obscurely, Ice Choir mimicking Scritti Politti’s Cupid & Psyche 85, the Mary Onettes explore a style that hasn’t been high on recent indie-rock charts of trendy influences, instead looking to sounds that were commercially successful a few decades ago, but for a long time hadn’t aged well. It’s smooth, reverb-drenched and punctuated with syn-drums and trebly synth chords. The LP also avoids the pop anthems that were the centerpieces of its predecessors—there’s nothing here as rousing as Islands’ “God Knows I Had Plans,” and that’s a deliberate choice.

“This album is not about taking a new direction for us,” says Ekström. “It’s more about finding 10 perfect identities for the songs on the album. At some point, I wanted to make a statement with this album that we are much more than just the band that people think we are. I wanted to get away from the simple pop songs in a way, what we usually are good at. For this album, I wrote like 50 or 60 songs. Somehow, we wanted just to make an album that was more like—how do you say that word?—like an artwork more than an album with 10 pop hits. I wanted to make something more atmospheric.”

There’s a pent-up tension to Hit The Waves—it’s reminiscent of the Blue Nile, to use another ’80s reference—with music that’s by turns placid and uplifting, and lyrics that are often dark and foreboding. The songs allude to end times, sometimes for relationships, but more often with broader, social concerns. “Can’t Stop The Aching” moves from “Love is a feeling from space” to “Where are we heading to in this society?” and titles such as “How It All Ends” and “Evil Coast” foreground Ekström’s ominous perspective.

“The songs are like short stories in my mind—thoughts, ideas about everything around me,” he says. “Maybe I’m a little bit apocalyptic about most things in my life, actually.” He laughs. “For example, ‘Hit The Waves’ is not about swimming in the ocean. It’s about people and fitting in and how you connect to other people. I always have a bit of trouble relating to people around me. The song is about catching the social wave, or understanding the social game between people.”

The making of the album caused tension, too. Ekström and the band, which includes his brother Henrik as well as Petter Agurén and Simon Fransson, had produced their first albums themselves, but this time they brought in an outside producer: Dan Lissvik of the electro-pop band Studio. Lissvik had his own ideas about what the album should be, and he preferred working quickly, as opposed to Ekström’s tendency to be meticulous and precise. Ekström admits that he can be prone to “over-produce,” but he also thinks that Lissvik’s vision of the band was at odds with its identity at times. That opposition was a source of disputes, but it was also a valuable learning experience.

Ekström feels that by working with Lissvik, the band “passed some obstacle in our career.” He’s eager to take what he’s learned when doing the next Mary Onettes album, which, he says, they will likely produce themselves, and should come quicker than the four-year delay between Islands and Hit The Waves. (Granted, between those two albums, the two Ekströms released a Swedish-language project under the name Det Vackra Livet.)

Hit The Waves bears no overt signs of the conflicts that brought it to life, nor is it a pure break with the band’s past. And, ultimately, the cheese factor is rather low. The Mary Onettes’ love of the Cure still comes through on the bouncy “Blues,” which could be an outtake from Kiss Me, Kiss Me, Kiss Me, and their affinity for New Order surfaces in the delightful guitar hook of “Can’t Stop The Aching.” Ekström came to love that early-’80s era vicariously, through his older sister’s record collection. He’s not nostalgic for favorite bands of his youth; he’s inspired by bands of that time, and the Mary Onettes are all about exploring that sound anew.

“My sister listened a lot to ’80s movie music, the John Hughes soundtracks,” he says. “I was very little then, but they’re stuck somewhere in my mind. People ask me if I listened to all these bands that I’m inspired by, and I hadn’t. If I did listen to them when I was young, I probably wouldn’t be making this music now.”