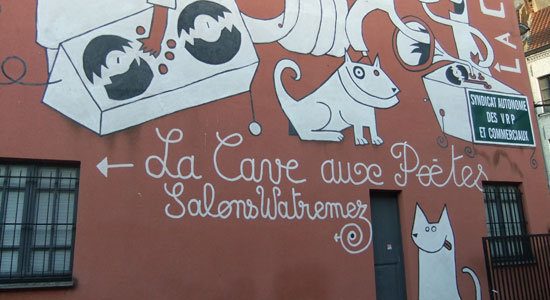 Gun to your head, whose balls would you prefer crammed down your throat: Tony Iommi’s or Josh Homme’s? Trick question: Iommi’s nuts are so huge they couldn’t squeeze into an blimp hangar, let alone down your pie hole.

The Black Sabbath guitarist’s legendary sack has echoed down the ages, teabagging generations of metalheads into blissful submission. Even in this Flemish outpost of Northern France have They sown Their divine oats. On May 9, stoner-rock pioneers Fatso Jetson and Yawning Man plowed through the town of Roubaix on their “Legends of the Desert” tour, with “Iron Man” riffs and fat spliffs in tow. (The headliners finished their set after the departure of the last metro of the evening, so this teabagee left early, his world adequately rocked.)

For such an unassuming dive, the La Cave aux Poètes club has a theatrical flair. The stage is cheesily lit to resemble an ’80s arcade game, kitschy as a still from the original Tron movie. The ceiling is so low that drummers can no more easily toss their sticks triumphantly into the air than spectators can pump their fists in caveman enthusiasm. A curious venue for the ceremonial Banging of the Heads.

Opener Glowsun lights a stick of incense at the front of the stage, which is flanked by guitarist Johan Jaccob’s haunting art nouveau silkscreens. The hypnotic “Death’s Face” finds the Goldilocks groove—Hawkwind-heavy hooks and wah-drench leads driven by a pace that is just right.

The French trio applies a thick layer of trippy effects, which does nothing to detract from its power anymore than CGI does from a sci-fi film. Instead, windy flanging and warm echoes add a goth-y menace and space-y otherworldliness. Vocals are rare because largely unnecessary. When Kong stomps on your chest, what need is there for words?

If Sabbath are the Olympic gods of metal, then Glowsun are the femme fatale Aphrodite born from Their castrated genitals. And if Acid King is a post-toke hacking cough, then Glowsun is the smooth drag of the blunt that precedes it.

Palm Desert, Calif.’s Fatso Jetson starts its set with the titanic “Magma,” which sinks even deeper into the lower registers when Mario Lalli’s guitar amp gives up the ghost. He scats his way admirably through the tune and is running (loudly) through a replacement by the second song.

Although squarely in the realm of desert rock, Fatso Jetson has more in common with Delta blues fashioned with matter from a neutron star than it does with the sun-baked cow punkery of fellow desert dwellers the Meat Puppets. On record, there are surfy, jangly elements that would fit snuggly in a Dick Dale instrumental. Live, the band unleashes mammoth riffs and maintain a dizzyingly high level of energy. Its performance is one of seasoned professionals: loose and adaptable, yet tight and immediate.

Between two songs late in the set, some jokester yells in shaky English, “Make some noise!” Then another Sorbonne scholar invites the band to perform an act best left to consenting adults.

“I’ll make some noise,” answers Lalli, “but I won’t lick your balls.”

And so the Almighty nuts have come full circle.