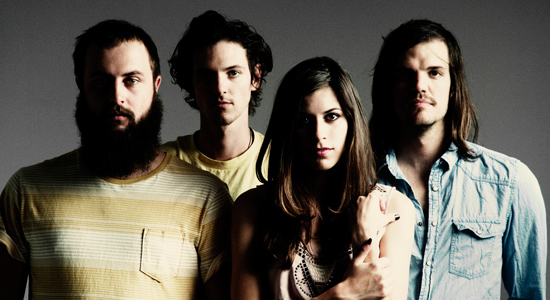 Folk/country upstart Houndmouth revels in the underbelly of society

After high school, Matt Myers didn’t really feel like going away to college, so he stayed in New Albany and went to Indiana University Southeast, across the river from Louisville. He didn’t feel like concentrating on anything, so he majored in general studies with a minor in philosophy. Six years later, when the time came to graduate, he thought a little about working in a coffee shop, but he never got around to finding a job.

“I was just looking to get out of school and do something unrelated to anything I had any knowledge of,” he says. After one last winery gig, he traded in the acoustic duo he had with Katie Toupin and went electric with drummer Shane Cody, an old friend who’d moved back to town. Cody called up bassist Zak Appleby, and something almost clicked. All they needed was for Toupin to join them on organ, and halfway through a session with too many dogs barking in the background, Houndmouth was born.

Recorded over five days in the high heat of the Hoosier summer, From The Hills Below The City (Rough Trade) feels like the second coming of the Band, mixing folk, country and rock into a whole that’s bigger than the sum of its parts, with each member writing songs, switching back and forth between instruments, and taking a turn on lead vocals. Mostly, the band is telling stories about small-time losers, like “Casino” (about a woman who puts her faith in whips, chains and freebase) or “Palmyra” (a love song to a girl who tastes like medicine) or “Comin’ Round Again” (about a coke dealer who’s fallen on hard times). “Had a couple of drinks in Memphis/Had some whiskey and some malt,” sings Myers, who wrote or co-wrote most of this album. “But when I tried to fight the waitress/She showed me the asphalt.”

Says Myers, “Nobody likes to hear about a guy who gets exactly what he wants. Then the story is pointless. It’s always better when somebody doesn’t get what they want, and there’s a problem at hand, and things are perfectly tragic. That’s what makes the best stories. Technically, the songs aren’t about me. Might be somebody I met, or a line I had written down. But every time I write about a character, there’s a little bit of me in there.”

In the process of recording From The Hills, Houndmouth started writing songs together, and with this first album behind it, there are at least a dozen songs ready for the next one, which can wait until the band finishes touring Europe and North America this summer. By then, Myers expects Houndmouth will be happy to come back to New Albany, “technically, your normal, boring little city,” where it will be free to do all the things Hoosiers do: shop, eat, shoot hoops and hang around the house playing guitar.

“I’m always busy now, and it’s good being busy, as opposed to scrounging by in college, just sitting around doing nothing,” says Myers. “I pretty much had a blindfold on; that’s how I was living my life. Looking back on it, it was pretty … horrible, not living like I should. But now, I feel alive and awake. I get to travel, meet people. I question myself now. It’s like I know myself better, I analyze what I’m doing. And that’s the biggest change.”