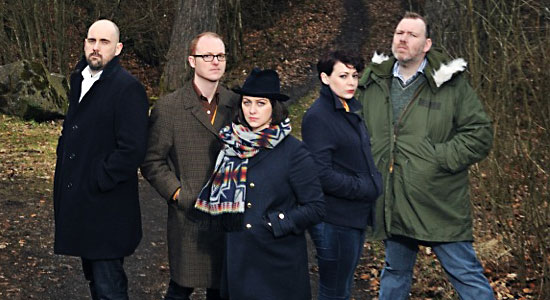 “People do seem to think I’m having a terrible time romantically, but really, I’m not.”

That’s Tracyanne Campbell of the ever-wondrous Camera Obscura. She’s on the phone from her home in Glasgow to talk about the band’s new album, but first she’d like to dispel a few hoary old myths, namely that people read way too much into her lyrics. And that, far from being a perpetually heartbroken wallflower, doomed to spill her emotional guts for the benefit of a voyeuristic listening public, she’s actually doing quite all right, thank you very much.

“It’s more about observation,” she says. “Observing relationships around you and talking about them. And I’m not necessarily talking about dramatic romantic relationships. I think that’s actually a huge misconception about me—that I’m always getting my heart broken—and that’s just not true at all.”

It’s testament, perhaps, to Campbell’s persuasive skills as a lyricist and performer, that many of her fans (this writer included) occasionally worry about her emotional well-being.

“Nah, it’s not like that at all,” she says. “It really isn’t half as bad as people obviously think it is. There are lines directly about me, but they’re mixed in with general observations.”

Camera Obscura has been perfecting its patented brand of bittersweet, lovelorn baroque pop over the course of four albums now. And after an almost four-year layoff, the band is back with Desire Lines (4AD), and it’s really rather lovely. Campbell talks of getting out of the band’s collective comfort zone by using a new producer, Tucker Martine (Spoon, R.E.M., My Morning Jacket), as opposed to Jari Haapalainen, who’d worked on its two last albums. But those fans suddenly fearing a startling left turn in the group’s sound can rest easy—there are no ill-advised forays into po-faced, chin-strokingly self-conscious experimentalism here. If anything, Desire Lines is a refinement, a lusher, perhaps more fully realized take on the perfect pop of Let’s Get Out Of This Country and My Maudlin Career. It was, however, perhaps the most torturous album of the band’s career to make, and listening to Campbell, it seems miraculous that it was made at all.

After releasing 2009’s My Maudlin Career, the group toured extensively and exhaustingly around the globe. Camera Obscura was due to start recording a new album at the start of 2011 when keyboard player Carey Lander discovered she had cancer.

“It was terrible,” says Campbell. “And it’s not something we really came out with and started shouting about. We just took our time and waited until she got a bit better, and tried to pick up from where we’d left off.”

Campbell’s keen to stress that Lander’s doing better now (“She’s been cleared, so fingers crossed”), but is completely candid that her illness and a large degree of personal disillusionment weighed heavily upon the creation of Desire Lines.

“It was challenging for personal reasons,” she says. “I mean, I don’t want to harp on about Carey being sick, but that was a factor. And personally, I felt burnt out, to be honest … I felt disillusioned by the whole thing, I felt I’d exhausted my ideas, I was sick of what would come out of me, I felt overexposed, tired of trying to write songs, and I think I maybe wasn’t really ready to start a new album. With the last two, everything was easy—it flowed, it came naturally. Everything was positive and good, even if the things I was writing about weren’t. But writing the songs for this album was the exact opposite. It was quite laborious. I don’t mind admitting it was hard work, and I never really felt that before. And there was so much uncertainty in general … I’m going to write these songs, but what are we going to do with them? Will we make a record or won’t we? But Carey was very keen for us to get on with it, and to be prepared for when she was better, and we tried our best to honor that, but it was hard.”

Desire Lines marks the band’s first collaboration with Martine, who’d come highly recommended by mutual friend M. Ward. Campbell talks of a sense of excitement and trepidation about a new studio and producer (“You don’t really know how it’s going to work”), but Martine went out of his way to make the band feel at home in his state-of-the-art Portland, Ore., studio. His approach to recording, however, did seem at odds with what the band had experienced previously. According to Campbell, he has an extremely meticulous approach to recording, with a particular emphasis on achieving the perfect drum sound that borders on the manically obsessive.

“We were used to having limited time before, and just going for a great live take,” says Campbell. “And this was a lot more cautious and selective … which could be very frustrating, especially for me as the singer, ’cause I’d been used to being the center of attention. If my vocals were good, we kept it. I could have sung 10 great vocals in a row in Portland, and it wouldn’t have mattered—it was all about the bigger picture, you know? But it was a good lesson for me.”

A definite upside of working with Martine was that, if anything, he had impeccable connections. Hence the appearance of My Morning Jacket’s Jim James, as well as Neko Case, who flew in to do backing vocals and ended up singing on half the album. Campbell admires both of her guests, but she seems particularly star-struck by the latter.

“She really put a shift in,” says Campbell. “It was totally surreal sitting watching Neko sing in the live room. I never thought anything like that would ever happen. I remember thinking, ‘This is totally mental—Neko Case is singing on my record!’”

Despite the considerable trials and tribulations of making Desire Lines, Campbell retains the wide-eyed enthusiasm of a fan. It’s been a long ride from the band’s roots as self-effacing Glaswegian indie kids to working with big-name producers on the other side of the Atlantic. And while many of her contemporaries have fallen by the wayside, Campbell and Camera Obscura are still with us nearly 17 years down the line. Which is, in itself, cause for celebration.

“I’ve thought about that recently,” says Campbell. “And it’s amazing that we’re still here and doing something that’s like the best thing ever. Looking back, I was from the South Side of Glasgow and John (Henderson) was from the East End, and we were just two people who’d met at college and had a mad idea that we could be a band and be like the groups we really admired, like the Pastels and Teenage Fanclub. And it’s nuts to me that I’m still doing it.”