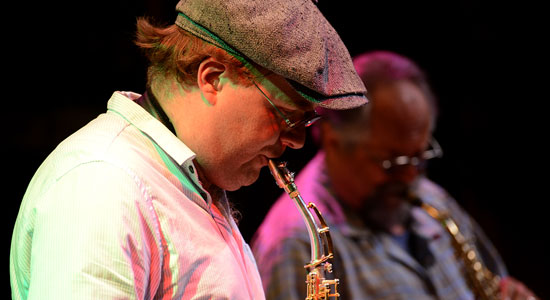 Things have been moving quickly at the Copenhagen Jazz Fest, but one thing that I’ve found is American musicians love Copenhagen. There seem to be expatriates all over the place, and the interaction between artists continually blurs international boundaries. Two days ago, I stopped by the fabled Jazz Cup CD store and caught a sterling set by guitarist Doug Raney. Raney’s father was the famous American jazz guitarist Jimmy Raney, and Doug’s a chip off the old block who made numerous records for the Steeplechase label back in the 1970s. Doug moved to Denmark in 1977 and has never looked back. His set at the Jazz Cup was straight ahead, and Raney’s band members are all great Scandinavian musicians.

After Raney’s show I strolled down the street to the Café Sommersko to hear Boston-bred saxophone legend Jerry Bergonzi. Bergonzi has been coming to Copenhagen for years, playing with a band of great Danes including pianist Carl Winther, bassist Johnny Aman and drummer Anders Mogensen. After Bergonzi’s burning set, I walked over to the Jazzhouse and witnessed the amazing spectacle of drummer Marilyn Mazur’s Spirit Cave. Mazur was born in the U.S. but moved to Denmark at age six. Her Spirit Cave project was bombastic/fusion-fantastic with Norwegian trumpeter Nils Petter Molvær playing through a range of electronic processing. Mazur herself was a whirling dervish, banging around on a huge drum set, gongs and an arsenal of percussion—their sound was huge and very exciting.

Last night, I went to the Betty Nansen Theater, where the Valby Summer Jazz organization presented the international premiere of Joe Lovano & Benjamin Koppel Mezzo Sax Meeting. The mezzo-soprano saxophone is a new instrument—created by a Dane, of course. Danish saxophonist  Koppel was the first musician to get one, and after American sax veteran  Lovano saw it, he acquired one, too. Together, Lovano and Koppel presented this showcase for their new instruments—supported by American pianist Kenny Werner, Swedish bass legend Palle Danielsson and drummer Audun Kieve. The saxophones sounded great, and the band’s playing was totally inspired. If things keep going like this, I’ll have a hard time coming home myself!