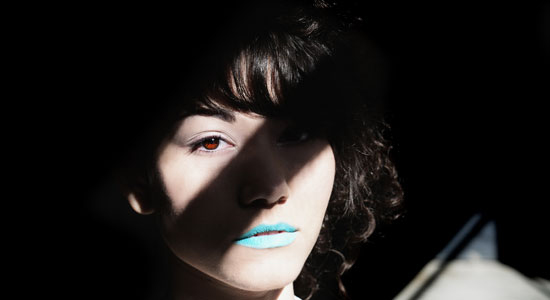 Mree’s second self-produced album, Winterwell, is a passionate blend of heartfelt acoustic folk and plush electronic textures, brought to life by her rich, multi-layered vocals. Mree’s lush harmonies float in and out of the mix like perfumed clouds, drawing you into a dizzying swirl of muted colors and ambiguous emotions.

“The songs are about being in two places the same time, that weird feeling you get when you’re not certain about your emotions,” says Mree. “I started writing the songs for this album last winter and tried to capture a bleak, empty feel by using a lot of reverb. By releasing it in summer, I hope to give you that same feeling of being slightly dislocated.”

Armed with a guitar and an effects pedal that allows her to loop her vocals into an ever-shifting collage of sound, Mree is able to reproduce most of the album when she plays live, but it took her a while to overcome her early stage fright. In fact, it was coming to terms with her stage fright that led to her commanding internet presence.

“I started out doing covers of songs and posting them on YouTube,” she says. “Looking at the camera was easier than facing an audience. The positive feedback I got helped me overcome my stage fright. I didn’t like performing live when I was in high school, but now that I’m a bit older and more experienced, I love it.”

The clips Mree put on the internet have gotten more than 7.3 million views in the last couple of years; 40,000 fans subscribe to her YouTube channel. Her debut album, Grow, rose to number 18 on iTunes’ singer/songwriter chart in 2011.

“Grow was more acoustic,” she says. “This time I wanted to experiment with an ambient post-rock approach to see where it took me. I use Pro Tools and my computer to record. I usually start with a melody or chord progression. Once I lay that down, I start adding layers. Sometimes what comes out is exactly what I heard in my head; others times it goes in a completely different direction. That’s the great thing about the creative process. You don’t know where you’re going when you start, but then you come up with something beautiful.”

Winterwell plays like the seamless soundtrack to a long, melancholy day. Muted acoustic guitar, spacey keyboards, subtle touches of percussion and the almost subliminal sounds of banjo, xylophone and electric guitar provide the foundation for restrained vocals that play with the lyrics, often drawing out syllables until they lose meaning and become another element in the overall sonic landscape.

“I was inspired by the way Jónsi and Sigur Rós write lyrics in Hopelandic,” she says. “They use the sound of words like an instrument. I don’t want my vocals to be the focus of a song. I like to keep the lyrics ambiguous, so they can mean different things to every listener. There’s a freedom in that way of writing. I don’t think my lyrics should be any more constrained than my music.”